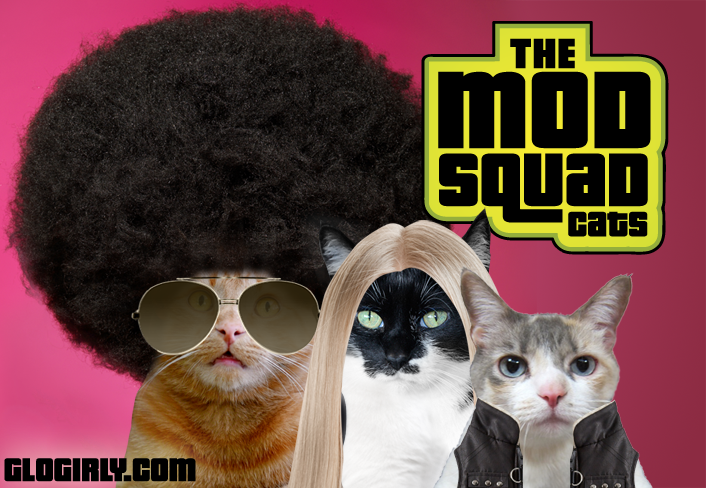 WAFFLES:  Boss! I think my head is starting to tip over!

KATIE:  Well maybe if your afro wasn't the size of a wrecking ball–

WAFFLES:  I'm afraid to move, Boss. What am I going to do? Aren't we supposed to be fighting crime and stuff? Isn't that what Mod Squad Cats do?

KATIE:  Don't worry about it, Waffles. I think you'll probably scare all the criminals away with that wig.

WAFFLES:  So Boss... *whispers* Don't look, but there's another cat in our picture. Do we need to arrest him? Or is he undercover too?

KATIE:  Well first, she's a SHE. Her name is Zeru. And second, everyone knows there were three characters in The Mod Squad. You're Linc with the big hair and glasses. I'm Julie, the BEAUTIFUL blonde who ALL the mancats were in love with. And Zeru here is Pete.

WAFFLES:  But you said Zeru was a girl!

KATIE:  Yeah, well being a boy didn't stop you from playing Laura Ingalls Wilder. And the hills were alive and just fine with you as Julie Andrews.

ZERU:  Uh, hello? Excuse me. I'm here looking for a forever home and I'm just wondering what I'm supposed to do? They gave me this leather vest thing and told me to just stand here and look cute. Uh, no one said anything about a wig though. 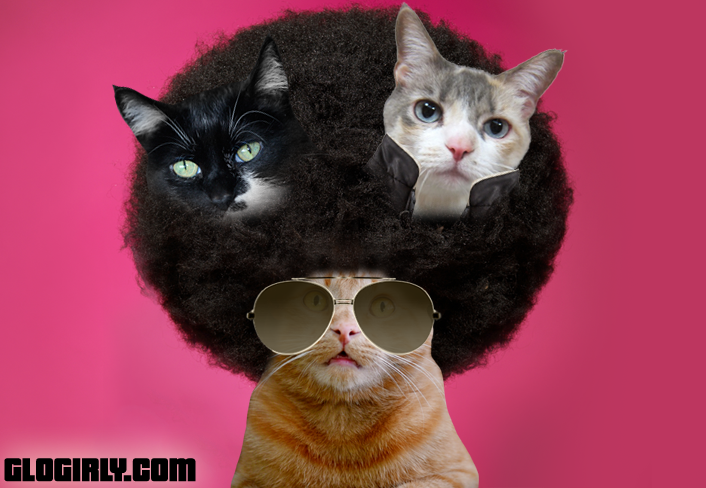 
Announcing TV Trip Saturdays with the PAWS Shelter Cats!
Our Saturday spoofs just got a whole lot furrier! Each week an adoptable cat from PAWS Pet Animal Welfare Society will be making a cameo appearance in our TV Trip blog series. Through the magic of Photoshop, they'll join Katie and Waffles in their TV time-travel adventures.

We'll also introduce you to the cameo cat and share a little bit about them. Maybe, just maybe... some silly wigs and special effects will help our shelter friends find forever homes.

Special thanks to our partner in crime, Maggie Swanson, the photographer behind our cameo cats and a devoted volunteer at PAWS. Maggie is the author of the blog, Sundays at the Shelter, where she features adoptable cats from PAWS each and every week. Her beautiful photos have helped countless homeless cats find loving homes. 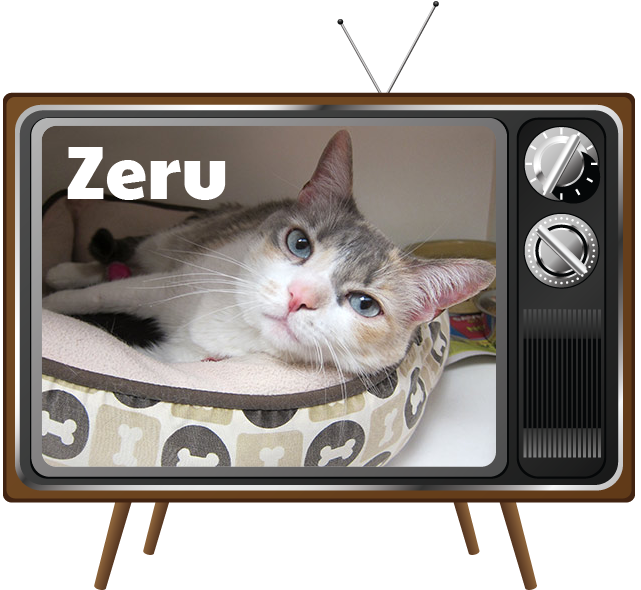 Today's Cameo Cat
Zeru is a sweet and affectionate 8 year old girl cat. She's got a cute and compact body and a BIG friendly purr. She loves people... but other cats? Not so much. Zeru probably doesn't realize Katie & Waffles are even cats, what with all that hair.

Labels: GLOGIRLY-Tails Of A Cat And Her Girl, PAWS Pet Animal Welfare Society, Sundays at the Shelter, TV Trip