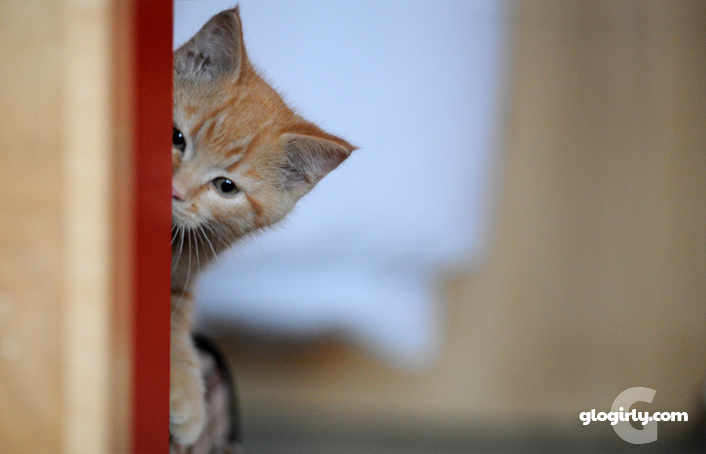 Waffles is a cat of many obsessions.

2. Ceilings
We introduced you to his ceiling fixation just yesterday. Ghosts, monsters, the red dot family... someone or something is definitely living in our ceilings.

3. Katie (me)
Really anything that's mine From food to toys to loungers and worst of all, my tail. He's got to have a piece of it. Or at least a smell of it.

Waffles' GREATEST obsession though, more than all those things combined, is:
DOORS

Case in point: If you were on Facebook this week you may have seen this:

It's quite possible his door obsession can be traced way back to the week he spent in the kitten quarantine room.
November, 2012. 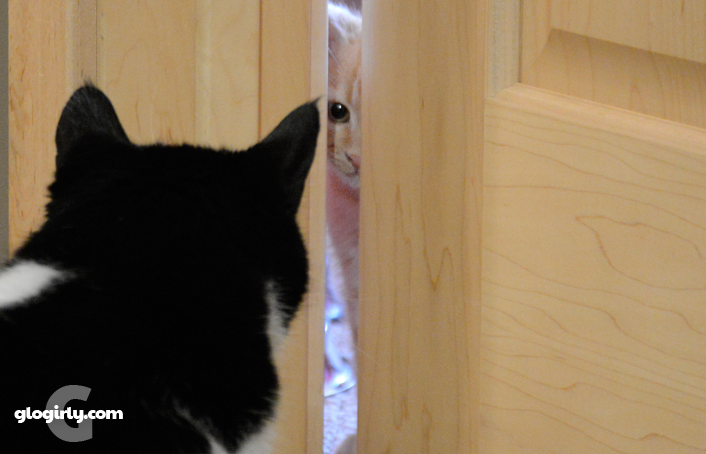 WAFFLES:  Hey YOU! Let me out of here!

KATIE:  Hey YOU??? Do I look like a YOU? The real question is who in cod's name are YOU and what are you doing in MY townhouse?

KATIE:  *sigh* This is NOT a good sign. Life as I know it has taken a very wrong turn.

WAFFLES:  You took a wrong turn? Are you lost? Maybe you should stop and ask for directionals. 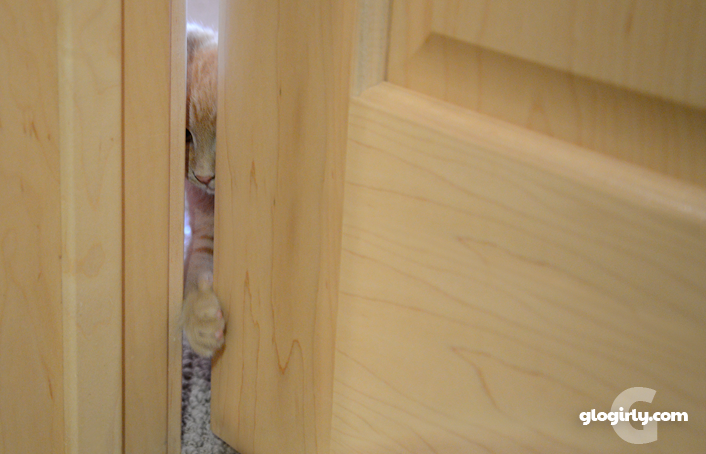 And thus began the obsession with the other side of the door.

About Today's Photos
Today's photos were taken back in late November, 2012. Waffles had only been with us for a few days and had not yet been outside the kitten quarantine room. This was the day we decided to crack the door and give Katie & Waffles a glimpse at each other. That second photo is actually the first time they laid eyes on each other. There were a few fireworks. Katie hissed and Waffles, not really knowing what to do, copied her and hissed back. We knew it was going to be a long haul!

Ever since Waffles was a kitten and really even more so today, he's completely infatuated with doors. He tries to climb the door frames, catching his back feet in the door jam so he can reach the top. He sits in doorways and yowls. And he loves looking behind the doors, standing up with his feet on them and inevitably closing them on himself. The powder room is his favorite. Earlier this week he locked himself in there THREE times. Later the same evening, we heard a distant door shut and had to go on a Waffles hunt to set him free. Our box of door stops should be arriving from Amazon any day now.


Has your cat ever locked himself in a room or closet?