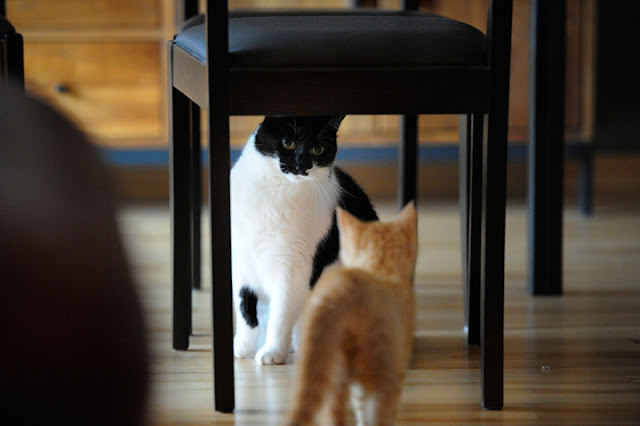 He's out. Waffles Too has officially come out of the kitten room. After our supervised Meet-and-Greet I wrote of yesterday, Glogirly & Gloman decided (without my consultation I might add) they saw no reason Waffles Too and I couldn't spend the day together with the run of the townhouse ...under their watchful eyes.


That kitten was EVERYWHERE. I had no idea anything could move that fast. I just sat back and watched the show. It's like watching Animal Planet TV on steroids. Truth be told, it's kind of entertaining. So much so that I haven't even had reason to lower my ears into the aircraft position.

For the most part we kept our distance. But when Waffles Too approached, and crossed that sacred line, I countered with a well articulated hiss.


Only once did the pea eyed monster return fire. He caught on quickly though and began to walk around me, maintaining a 24" no fly zone.

Toys. Can you say *AWKWARD?* To Waffles, the world is his toy. This includes all of MY toys. Sometimes the lure of the wand toy causes him to cross the no-fly zone, thus resulting in another hiss exchange.  Waffles doesn't let it get him down though. He doesn't cower into a corner or run for cover. He just hops away and moves on to the next shiny object. He's got chutzpah and the attention span of a gnat.

Glogirly is home much of the time now, so she's been able to watch Waffles and make sure he doesn't blatantly screw up. When she leaves to get groceries or go to the gym, she puts Waffles back in the Kitten Room. She also puts him back at bedtime. She probably wants to make sure the little monster doesn't attack me in my sleep. For that, I am grateful. 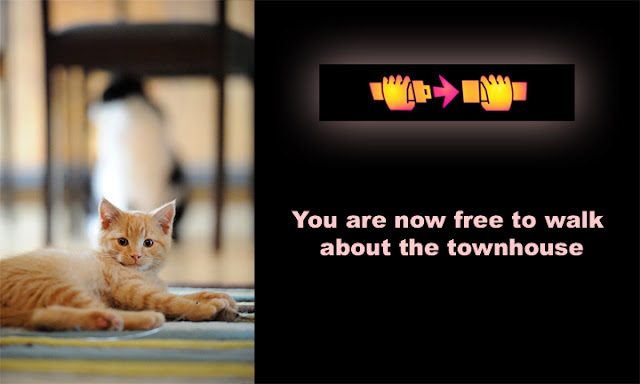 For the most part, this kitten invasion has been turbulence free. The seat belt sign is off and we are now free to walk about the townhouse.

But Waffles, be careful where you step.

Labels: GLOGIRLY-Tails Of A Cat And Her Girl, Waffles Too