As The Doorknob Turns

A big shout out to my friend Brian for inspiring the name of this post.  It's a soap opera around here, I tell you. After the infamous *door crack* seen round the blogosphere, it came time for a face-to-face meet-and-greet. That is according to Glogirly.

Since it's apparent the little orange monster is here to stay, I'd be fine just keeping him locked up in the Kitten Room. This thought fell on deaf ears though. Deaf from listening to Waffles Too mew and mew and mew and MEW I'm sure.

So we all gathered by the Kitten Room door like we were going to sing Kumbaya. Gloman with a camera in one hand and Glogirly with a large towel in another. What? Was she planning on taking a shower all of a sudden?  She mumbled something about "saving" the kitten if things went south.  Saving the KITTEN??? Whatever. 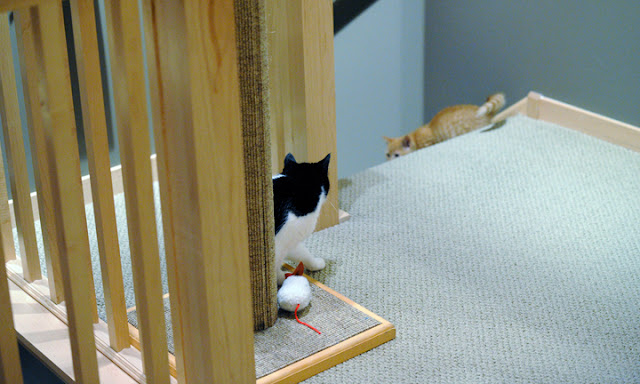 The door opened slowly and the small beast emerged. He hesitated for a second or two then he ripped into action. Running, smelling, playing, jumping and pretty much ignoring me. I stood by in shock and amazement. He approached, somewhat cautiously, and I returned with a nice hiss.

This dance went on for about an hour. Waffles Too is such a show off. Twirling on the steps, cooing like a newborn baby, capitalizing on the cute factor. I can see right through him. 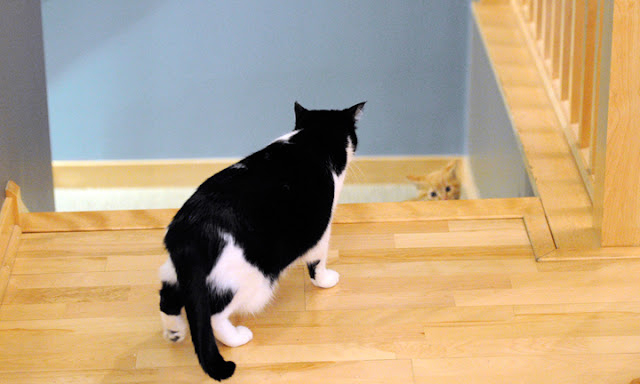 We each maintained an appropriate distance. For a little pea brain, his instincts are pretty good. He knows I'm not to be messed with. He's curious about me, but will purposefully walk around me.

Glogirly said she was proud of me. Proud that my ears stayed in an upright position indicating curiosity.  Proud that I didn't go all postal.

Gloman said he was proud of Waffles Too. He was pleased that Waffles didn't cower away from me in fear. In fact, Waffles didn't even seem to care that I was there.

The next thing I knew, Waffles was scooped up and put back in the Kitten Room.  YES! I remained victorious. Until I heard talk of the next day's plans...Waffles & I "spending the day together."  I slept with one eye open. 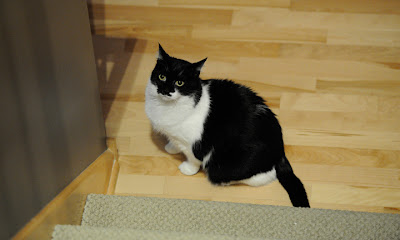 COMING UP NEXT - A Whole Day Of Togetherness
With some AMAZING photo documentation.

Labels: GLOGIRLY-Tails Of A Cat And Her Girl, Waffles Too