Inside The Door Crack 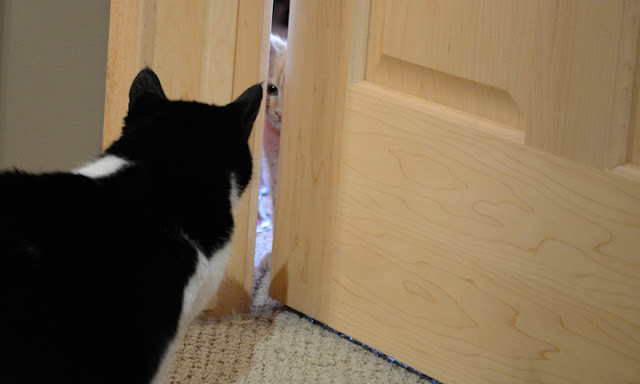 Thank you so much for your words of encouragement.  Those of you that have experienced a kitten invasion and lived to tell, well you know.

Glogirly has my number. I may look all cuddly and sweet on the outside, but I'm really kind of a diva. I know... shocking, isn't it?  She knew that in order to avoid certain warfare, a gradual (and do I EVER mean gggrrrraaaaaaadduuuaaaallll) introduction was necessary.

When Waffles Too came home he immediately checked in to the Kitten Hotel. You know, MY bedroom with MY toys, MY scratching post... The door stayed shut for about 36 hours. Glogirl thought she could fool me, but I knew what was going on. She was sneaking into the kitten room, having parties with Waffles Too. I could hear them whooping it up late into the night. 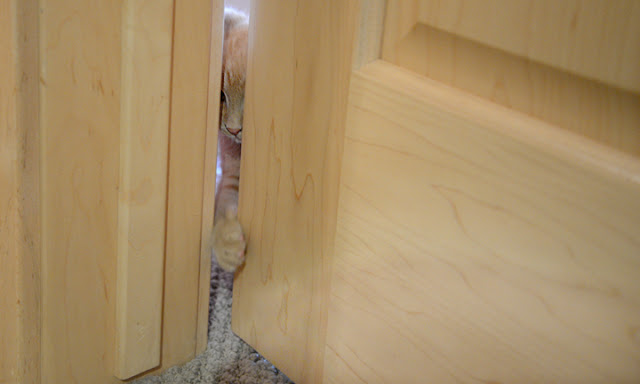 The next step was the infamous *door crack.* Glogirly wanted us to actually SEE each other without being able to get in each other's faces. I guess she thought we might want to play patty cake through the crack. Yeah, right. 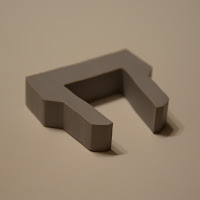 Here's how she rigged things up.

She got this rubber doorstop thing as a giveaway at Barkworld. She almost threw it away, thinking she'd NEVER have a use for it. Too bad.

It attaches to the side of a door to keep it from completely closing, creating a crack about 1 inch wide.

You can see it in action below. 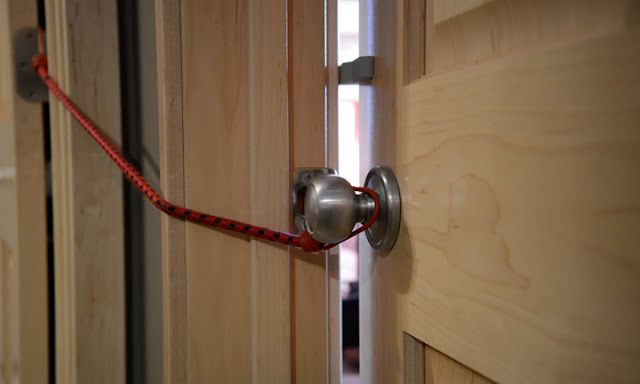 Next she grabbed a bungee cord from the garage and hooked one end to the outside of the kitten room doorknob and the other to a door hinge in the neighboring powder room.  This created enough tension (as if there wasn't enough already) so that neither Waffles Too nor I could move the door. How do I know this?  I tried.

Waffles was all "Um, Mew, Um, Mew, Mew, Mew, Um" and stuck his paw through the crack. That is until I let him know how I felt about it. One nicely articulated hiss and Waffles went silent. FINALLY. I didn't even have to use my paws. He knew who was boss. 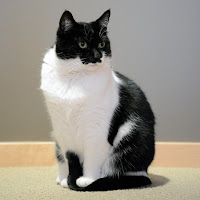 We exchanged a couple of low drawn-out growls. (Have you ever heard a kitten growl?  Even *I* had to bite my lip to keep from laughing)  Waffles then remained silent and kept his paws to himself. After a 20 minute stare-down, I got bored and left. But I remained *on guard* just a few feet away from the door.

Glogirly had also placed my food near his door. Sheesh...a kitty can't even EAT in peace around here. She said something about creating a positive experience around the door. I've got news for you, Glogirly...a positive experience would be taking that non-stop mewing machine back to where he came from.


Eventually when I realized he wasn't coming out, I went back to my normal napping activities.  I even played with Glogirly & Gloman later that night, although not as robustly as usual.

We did this song and door crack dance for a few days. Until...

COMING UP NEXT:  The Door Opens

Labels: GLOGIRLY-Tails Of A Cat And Her Girl, Kitten Room, Waffles Too