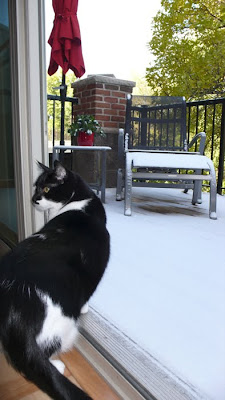 Hi everyone, Katie here.
Hey Glogirly! Look at this white stuff on the balcony. What the... Would you look at what I woke up to this morning. I remember there being a bunch of this white stuff outside earlier this year. Every time there's a bunch of it Glogirly has to bundle up with lots of coats when she goes outside. The bundling is usually preceded by a few expletives. Then when she returns, more expletives. 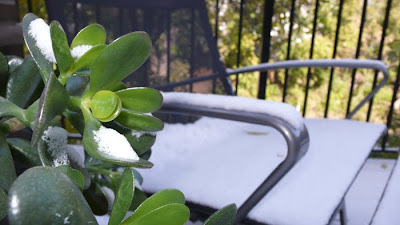 This poor cactus probably won't even make it through the day. It's wilting my the minute and I'm afraid it's a goner. Glogirly should have brought him in last night like she did the geranium.
So the weatherman said this stuff is snow and it's our first of this season. It's not supposed to stay long. But there's more where it came from and this is apparently a glimpse of things to come. 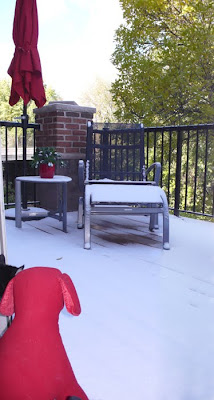 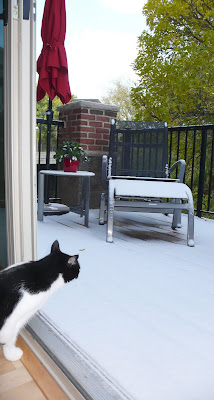 Glogirly opened up the door by the balcony so I could get a good whif. Stupid Red Dog was in my way at first. This snow stuff, it's very cold and windy. Kind of hurts my delicate nose hairs and feet. I'm going to have to think twice about stepping outside this door again. 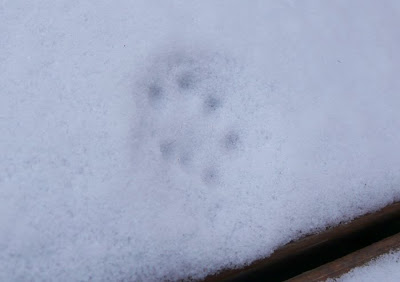