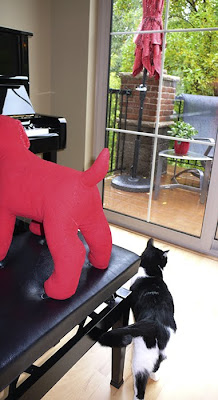 Hi everyone, Katie here.
Over the past few months I've introduced you to many members of my immediate and extended family. You've heard about Gloman the Cat Whisperer, my New England Cat Cousins, there's Muti & Sparky and of course Gabe the Marine. It's now time for you to meet my arch rivals. Red Dog and Black Cat. 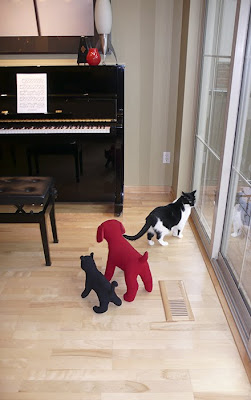 By now you know that Glogirly is a little, well...strange. There I said it. She's got these stuffed, red dogs and a fake, black cat just sitting on the floor around the townhouse. Supposedly her story is that she used to design mannequins. Well the need arose for some dog mannequins to wear silly little outfits for some stupid store. So she designed these red dogs in a bunch of sizes. A little bigger than me. Bigger than me. And way bigger than me. Thankfully she had the presence of mind to throw a cat into the mix. So what we've got here are leftover cat and dog mannequins. I know, a mannequin is supposed to be fake. But wasn't there some movie where the mannequins came to life? I think there was. Anyway I can't take any chances, so I observe great caution around these so-called animals. 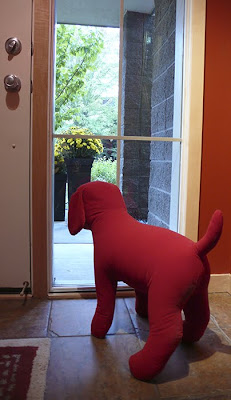 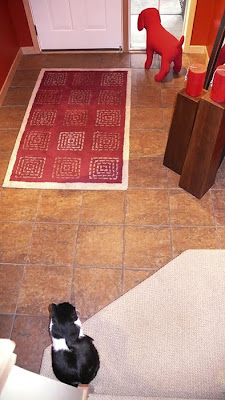 This should be my job mind you, but I've been forced to step aside and let this beast stare ferociously out the ground floor window. He's at least three times my size, so I really can't do much about him. I approach occasionally, say if there's a passerby rabbit or squirrel. But I never challenge Biggest Red Dog. I'm smart enough to know it's just not safe. 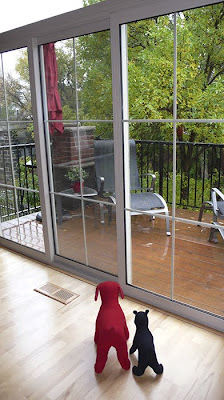 Upstairs in the townhouse we've got another, albeit slightly smaller, Red Dog and my primary enemy, Black Cat. Red Dog is bigger than me, but not by much. Sometimes I get a little carried away and take a swat at him. Then I realize what I've done and back off. He can't be trusted. 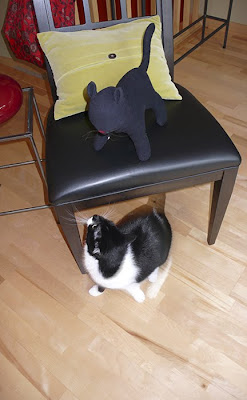 Black Cat on the other hand is fair game. He's smaller than me. He's stupid. He can't see very well. I'm not going to beat around the bush here. I don't like Black Cat. I don't like him one bit. Glogirly and Gloman seem to derive great pleasure from tormenting me with Black Cat. Just to get a rise out of me they'll bring him into the living room and put him up on the sofa. Or they'll stick him on a chair or table, something that's taller than me. That really chaps my you-know-what. I've even seen them pet him. When it's more than I can take I don't hold back. I attack. 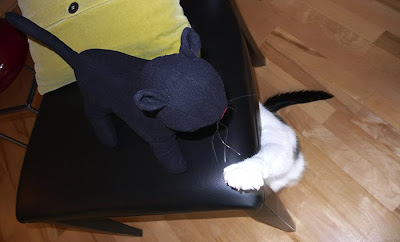 I sneak up on him and when I detect an opening I grab him with my paw and then go for the neck. 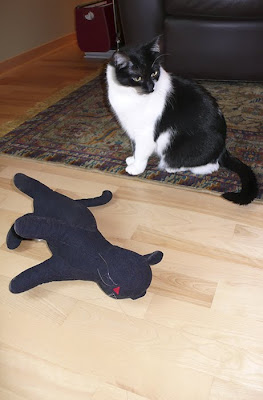 Once I wrestle him to the ground and he's laying on his side I know I am safe. I am victorious. This townhouse, and everyone in it, is mine.