KATIE:  I'm pretty sure they didn't get each other at the shelter. That's not really how it works. 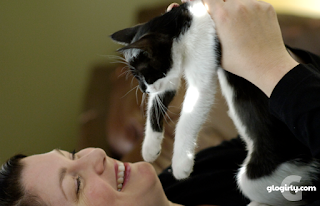 Labels: GLOGIRLY-Tails Of A Cat And Her Girl, Gloman, Happy Anniversary, How Glogirly and Gloman Met