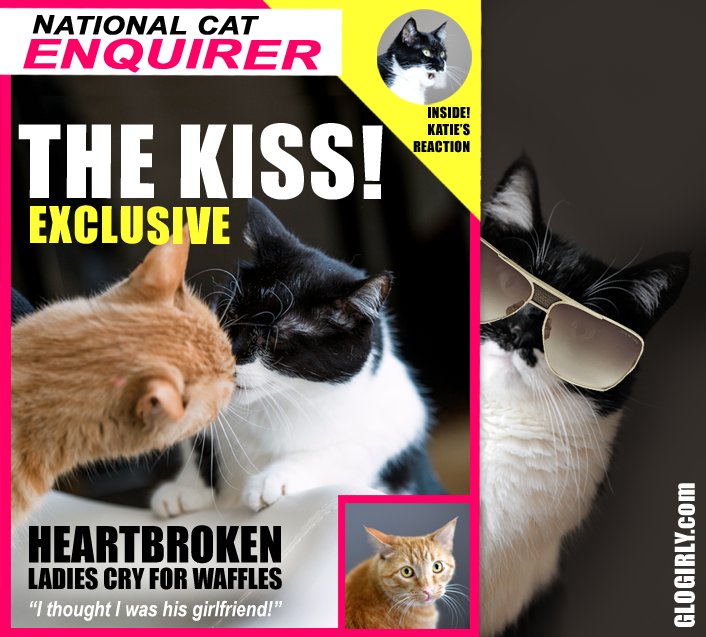 Shock waves out of Minnesota today. Two rival cats caught on camera in what can only be described as the ultimate in compromising positions. The lip-locking felines have been identified as Katie & Waffles of the GLOGIRLY cat blog.

The anonymous photographer behind the salacious shot is rumored to have sold exclusive rights to the photo for a figure in excess of elebenty billion dollars.

Katie, pictured right, argues the "misleading and horrifying snapshot" was a result of some mad Photoshop skills, however the authenticity of the image has been confirmed and the photograph deemed untouched. Katie now claims the viral photo is "nothing more than a bad camera angle."

Waffles, the orange tabby with his back to the camera, has wasted no time vigorously sharing the KISS photo on social media. Meanwhile leagues of women and clowders of female cats are heartbroken and in shock.

"I thought I was his girlfriend!" -Chris, Kansas City, MO

"But, but what was all that one in elebenty billion talk???"-Tutu, Fargo, ND

The contemptuous rivalry between Katie and Waffles is no secret to fans of their blog. According to legal experts, a single picture like this, exposing the two cats in such a damaging way, could not only permanently tarnish their reputations but take down the entire GLOGIRLY empire with a single swipe of the paw.