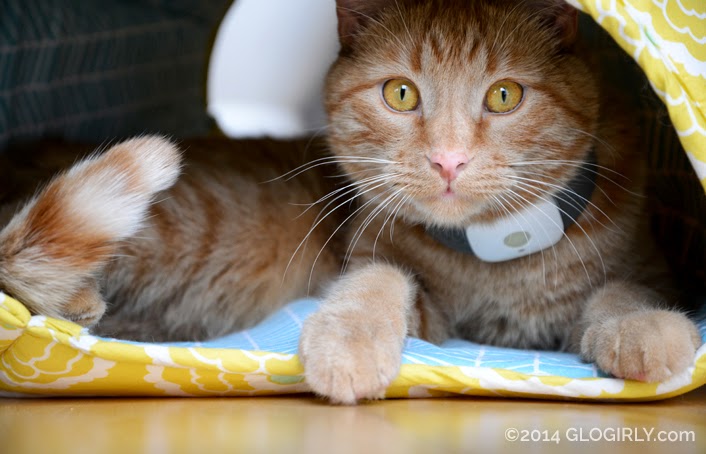 KATIE:  Actually Waffles, YOU'RE it. And this is no ordinary game of tag... I'm monitoring your whereabouts and activity levels right this very minute.

WAFFLES:  You mean you're SPYING on me?

KATIE:  Not spying, Waffles.  Monitoring, analyzing, keeping tabs on you with your new Tagg Pet Tracker. Think of me as Big Brother.

WAFFLES:  Boss! I thought you were a girl!!! 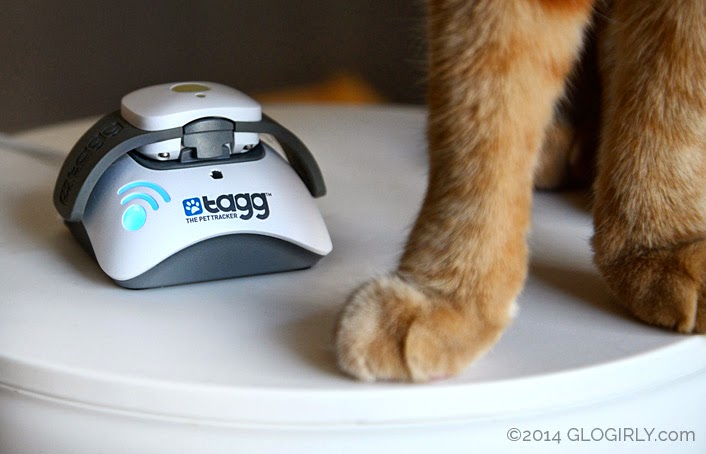 Wait, What???
This funky little device is called the Tagg Pet Tracker. It allows us to track Waffles' location and monitor his activity levels 24/7 from our computer or mobile device.

What you see above is the home docking tation with the pet tracker attached to the top. That's where we charge the tracker's battery, every 30 days or so, and it's how the pet tracker communicates with our computer to show us cool stuff like how many times Waffles raced around the townhouse or how many hours he spent sleeping, doing nothing at all. 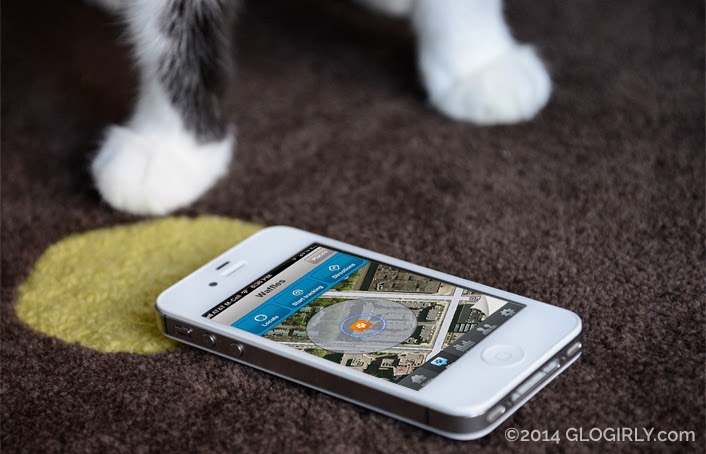 Where's Waffles?
The Tagg Tracker works with GPS and cellular technology. No matter where I am - at home or far away, I can tell if Waffles is in the 'Tagg Zone.' The Tagg Zone includes everywhere within a 150 foot radius from the center of our townhouse, which is where we have our docking station plugged in.  If we lived in a giant mansion or way out in the country, we could make our Tagg zone much bigger.

When Glogirly's away, she can check up on him by going to her iPhone app and telling it to locate Waffles. She gets an immediate text message and email letting her know if he's where he's supposed to be, inside the Tagg Zone. Sadly, I still haven't been able to figure out how to make it tell Glogirly when Waffles is annoying me or stealing my food. 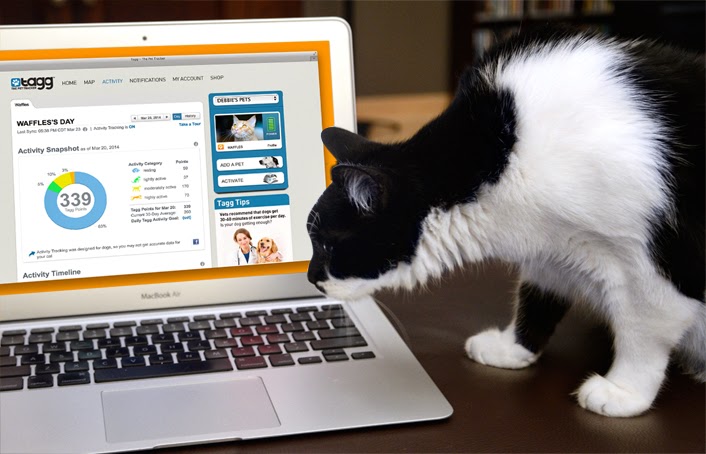 Waffles Daily Activity Score
One of the most fascinating aspects of the tracker is the Daily Activity Snapshot. As long as Waffles is wearing the tracker on his collar, the device is hard at work keeping track of how much time he spends at any of four activity levels:


The snapshot even shows us how many minutes Waffles spent at each level and at what time of day and night he was either playing lazy or playing crazy!
Checkout Waffles At-A-Glance: 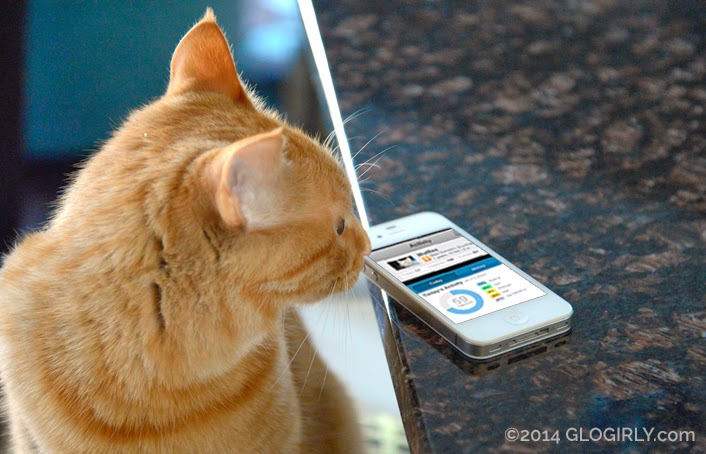 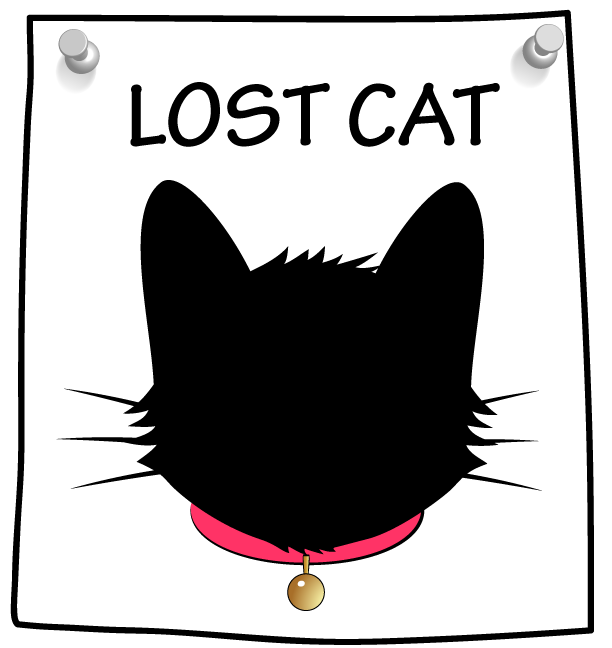 Losing a pet is terrifying, heartbreaking, dangerous  and something you hope and pray never happens. But thousands of pets are lost every year. Tagg's tracker will send you an alert via text message and email should your pet get outside your Tagg zone.

The GPS technology will not only help you find your pet, but provide directions on how to get there.
Although Tagg's website indicates that you will receive an alert within 12 minutes of your pet leaving the Tagg Zone, when we tested it here at the Townhouse, we received an alert in 5 minutes.

Admittedly, Tagg's core customers are dog owners and it's an awesome product for dogs. But it's also a fantastic device for cats that spend part of their time outside. Accidents happen and even pets who you'd least expect to get out, can and do. 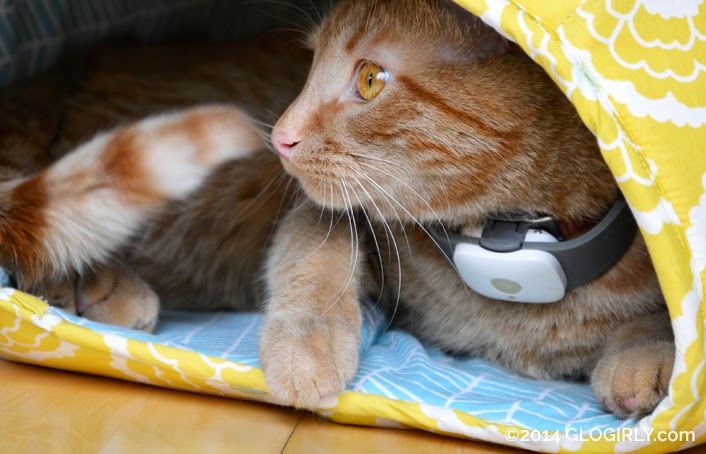 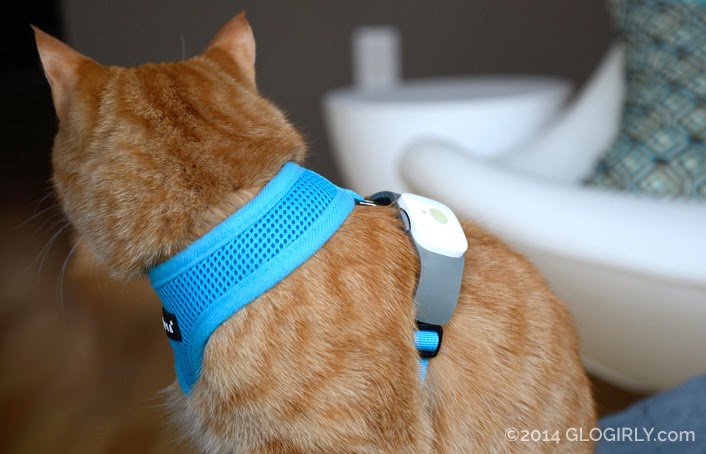 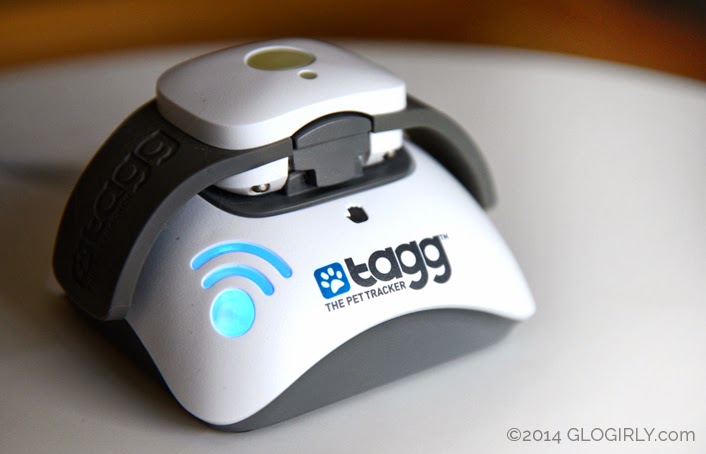 Special Savings
Enter promo code GLOGIRLY20 and receive 20% off the Tagg Promo Bundle, which includes the Tagg GPS Tracker and 12 months of service.

FTC Disclosure: We received our Tagg Pet Tracker & 3 months of service at no charge from Tagg. We also received a small fee to cover the time it takes to test the product, take photos and write the blog post. Receiving the free tracker and the fee did not influence our article or anything we say.  All sponsored posts on GLOGIRLY will always reflect our honest and unbiased opinions.

Labels: GLOGIRLY-Tails Of A Cat And Her Girl, Product Review, Tagg Pet Tracker