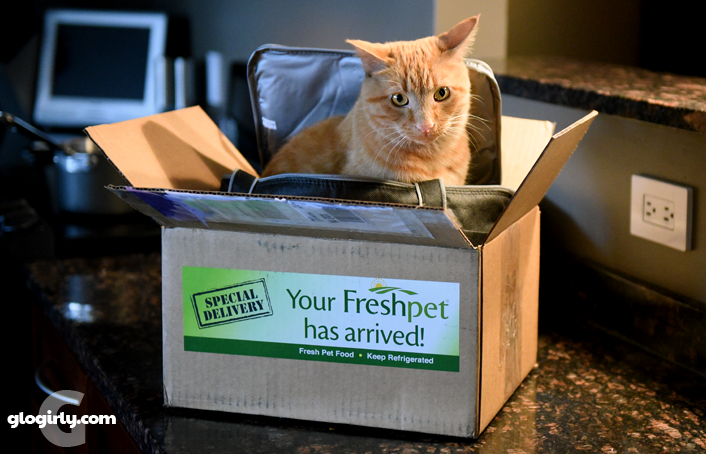 WAFFLES:  Check it out, Boss. I have arrived. 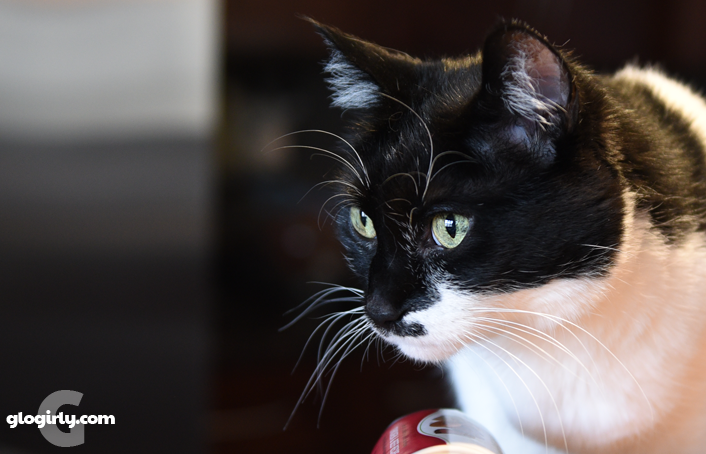 KATIE:  I was sort of hoping for different kind of Freshpet® actually.

WAFFLES:  What? I can be fresh.

KATIE:  Yeah, that's what scares me. 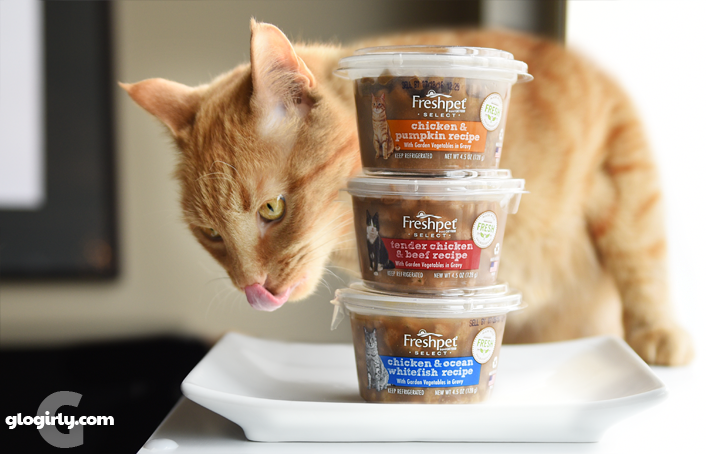 WAFFLES:  So the Boss and I are having a dinner date tonight. Glogirly says I have to treat her like a lady. You know, let her order anything she wants. Be romantic and stuff. Not lock her in the powder room.

The nice people at Freshpet sent me everything I need for our dinner date. They have these new food cups I think the Boss is really going to like. 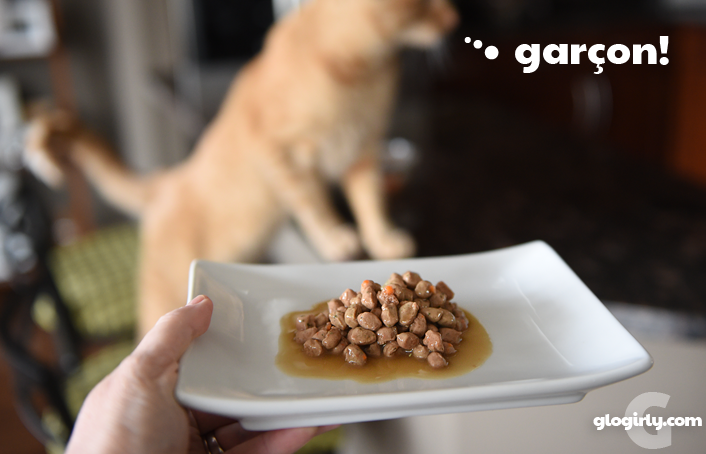 GARÇON:  Chicken and Pumpkin, for the lady and gentleman. 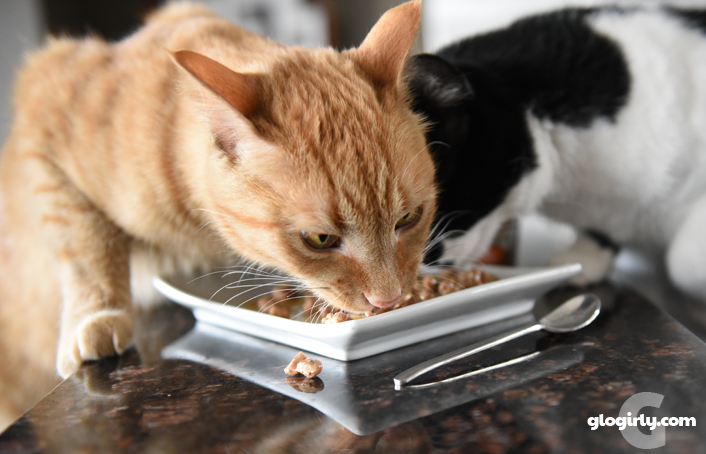 KATIE:  Waffles, you're eating off my plate again. Don't you know anything about date etiquette? 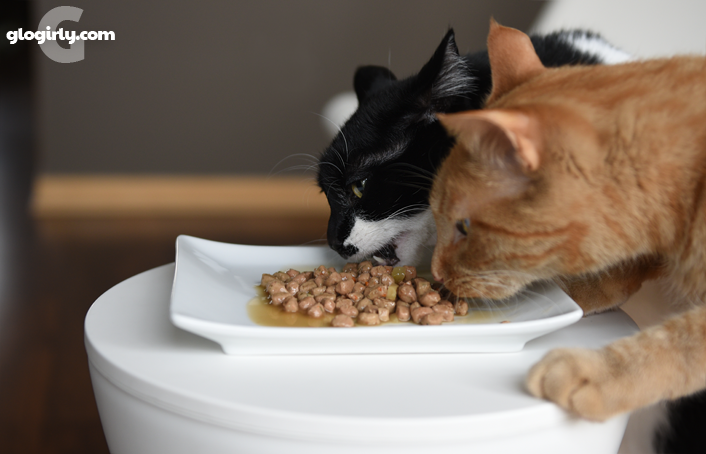 WAFFLES:  I'm just trying to be romantic and stuff.

KATIE:  Well go be romantic with your own plate. 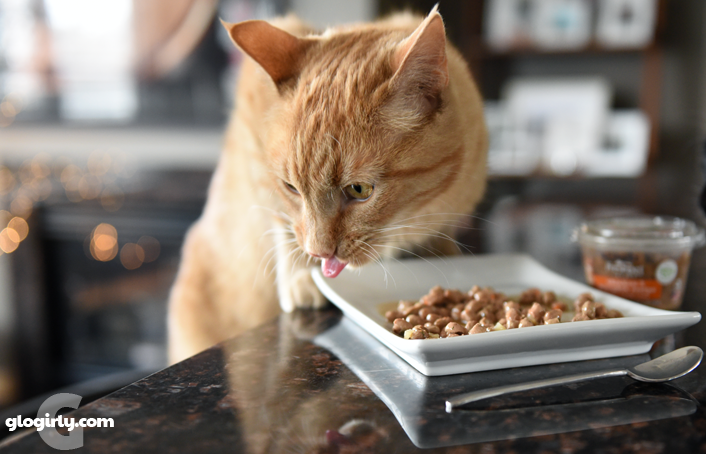 Fresh From the Fridge
Recently we had a chance to taste test Freshpet Select. We're always on the lookout for food we think our friends and readers might be interested in, so of course we told them to bring it on!

You may have seen the Freshpet refrigerator in your local market or even at some of the big box superstores. We did a quick store locate on their website and found 25 spots within just a 10 mile radius of our Minneapolis townhouse that carry it. They shipped ours to us in a nifty zippered cooler inside an even niftier box. ...hence today's lead photo.

We received an assortment of their new resealable food cups as well as a slice-and-serve pate loaf. 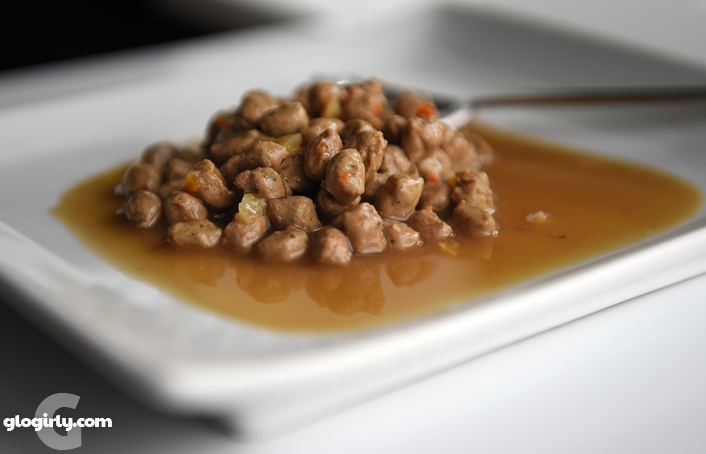 This is the Chicken and Pumpkin Recipe, with small morsels served in a light gravy. Glogirly wanted to add a fresh herb garnish for the photo, but that probably would have been a little too over the top. 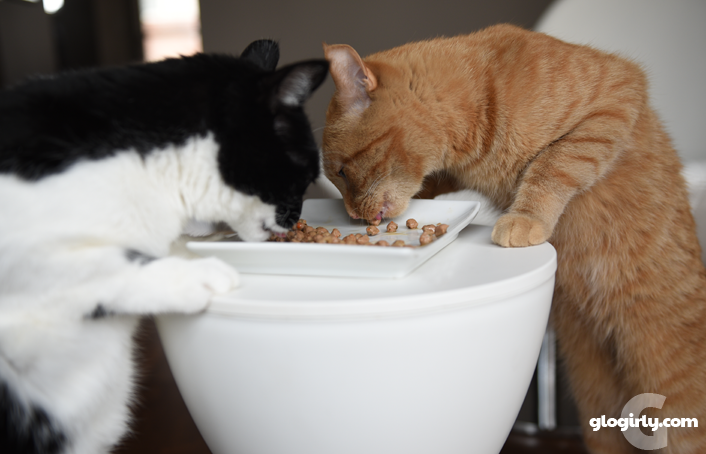 Though dinnertime is often heated here, what with all the pre-meal wrestling sessions, Katie and Waffles called a truce and actually shared a plate. Or rather, raced to see who could finish faster. Looks like the chicken and pumpkin was a hit. 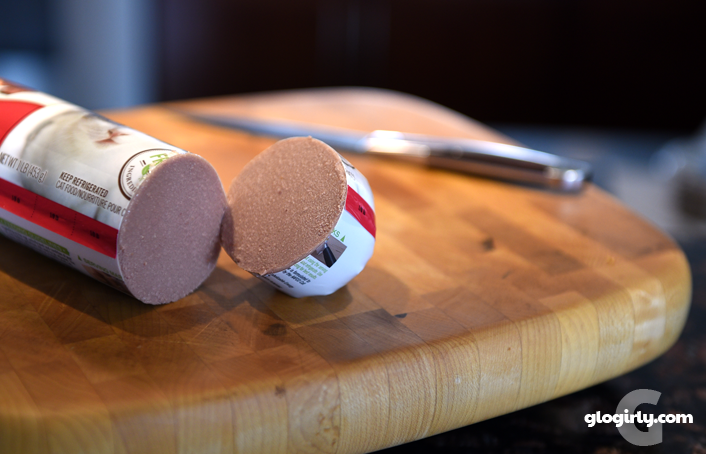 The Chicken and Beef Recipe Pate Roll is super easy to slice and serve. The package comes pre marked so you know just how much to slice for a serving. Once sliced, the wrapper slides right off. 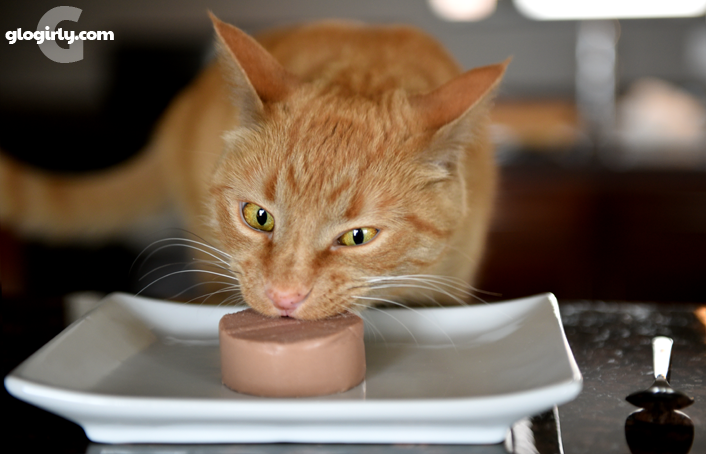 Waffles was particularly enamored with the pate slice. So much so that moments after this photo was taken, he launched into the whole piece, grabbed it and ran. Apparently he wasn't in the mood for sharing.

...So What's the Verdict?
TASTE
Katie and Waffles can be pretty finicky when it comes to new food. And Katie has special dietary needs due to her IBD. Despite all that, they both loved the food and gobbled it up.

We enjoy trying out different foods like these and using the ones Katie & Waffles like as special treats. As you can probably guess, we take a lot of photos here and having a small plate of something tasty can be a photographer's best friend.

PACKAGING
The convenient packaging makes it easy to serve and to reseal if necessary. Because the food is refrigerated, it's important to be aware of expiration dates. Each of the cups we received had a July/2016 sell-by date. They probably won't last a week around here, but we bring it up because it's different than the usual canned food you may have in your cupboards.

INGREDIENTS
The Chicken and Pumpkin and the Chicken and Beef individual cup recipes do contain whitefish. Though we don't suffer from any food allergies that we're aware of, some cats have sensitivities to fish and would therefore not be able to eat any of the cup recipes.

The Chicken and Beef pate loaf contains carrageenan, which can also be problematic for cats with allergies or sensitivities. It's a very common ingredient that's most often used for thickening and gelling. Many foods contain it, even human foods. But we feel it's important to point this out in case it's something you are trying to avoid. 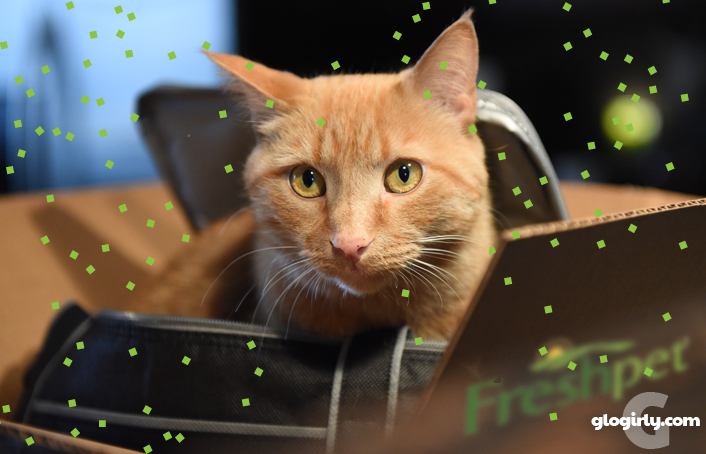 
Just enter via Rafflecopter below. Though prizes only ship to US addresses, readers worldwide are invited to enter. Should any winner reside outside the US, they may gift their prize to a US friend or shelter. Good luck, everyone! And thank you for entering.

a Rafflecopter giveaway
This blog post is sponsored by Freshpet®. We are being compensated for creating and featuring this content. Regardless of the payment received, we only feature products and services on GLOGIRLY that we use or feel our readers would enjoy using. All sponsored posts on GLOGIRLY will always reflect our honest and unbiased opinions.

Labels: Freshpet, GLOGIRLY-Tails Of A Cat And Her Girl, Product Review