On the Road with Waffles & Katie: Fun By the Fire & Synchronized Loafing 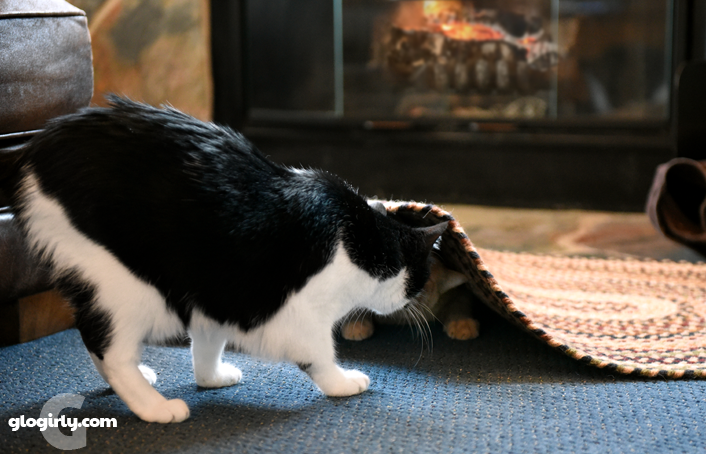 KATIE:  Waffles, what are you doing under there?

KATIE:  Not under the rug, Waffles! 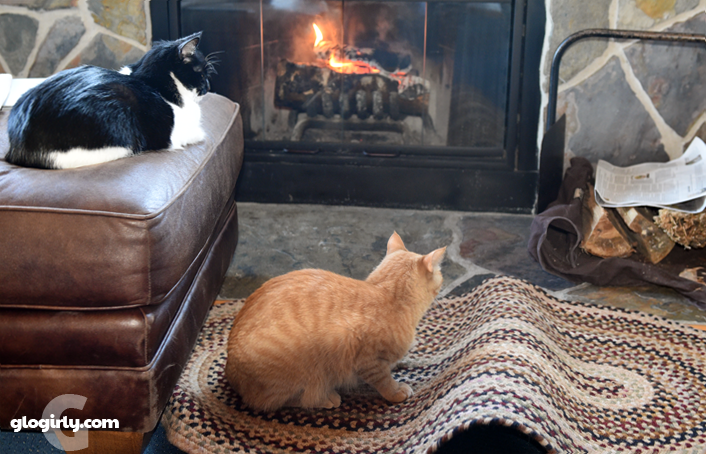 KATIE:  I suppose. But your rug's all messed up.

KATIE:  We relax. That's what you do when you're on vacation. 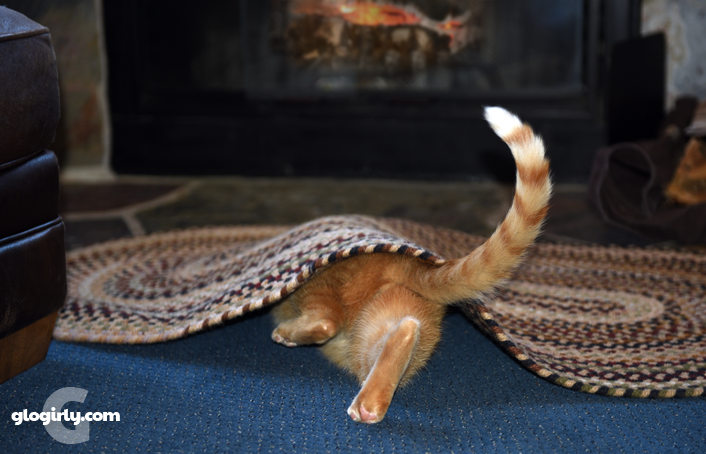 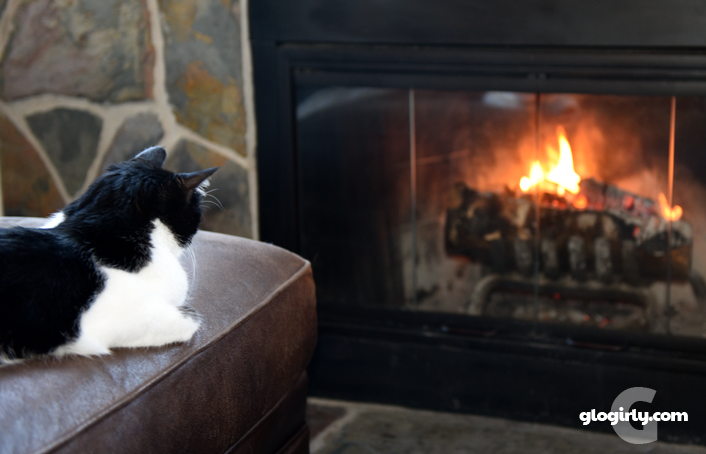 KATIE:  Whatever, Waffles. Have fun under your rug. All by yourself. 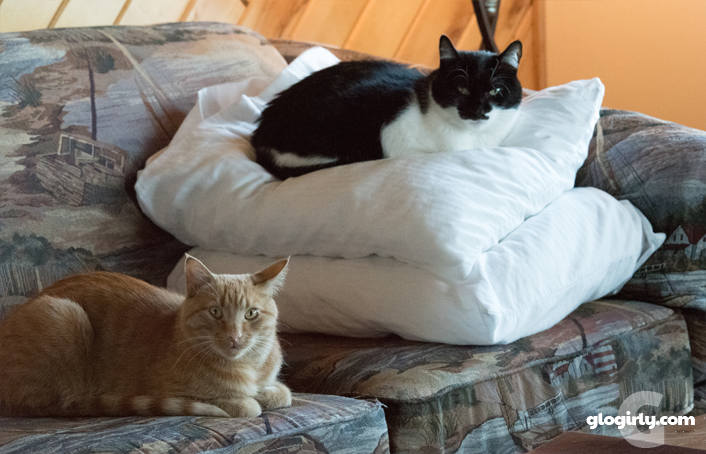 KATIE:   Ok, Waffles. On the count of three.

WAFFLES:  Three what? What are we doing, Boss?

KATIE:  And we're ready on ONE, TWO and THREE– 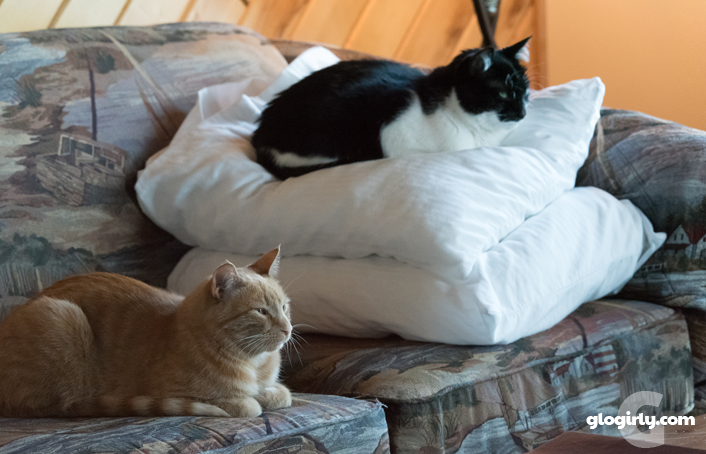 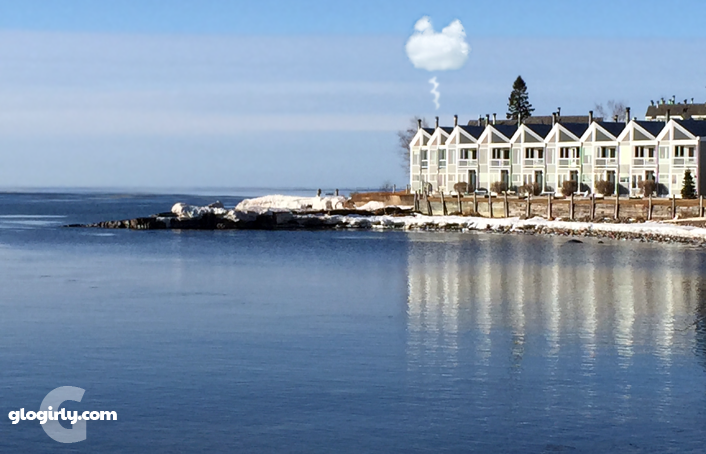 Our Little Piece of Paradise
We're staying in the tiny town of Tofte, Minnesota (rhymes with lofty) at a beautiful lakeside resort called Bluefin Bay. That's our condo... second from the end right on the rocks. When we arrived on Saturday, everyone was SO welcoming and went out of their way to make us feel special. There was a little snafoo with the one-bedrooom condo we had reserved and they upgraded us to one of their nicest and most spacious two-level condos on the property.

We've got three bedrooms, including a master suite with enormous windows and a view of the sunrise you wouldn't believe. There's a full kitchen, dining room and large living space that walks right out onto a deck so close to the water you can almost touch it. (But don't... it's really cold!) A second bathroom just off the kitchen is, according to Waffles, haunted. He's obsessed with going in and out and in and out. He often sings to the ghosts while inside and has twice locked himself in.

Loafing, Napping, Napping, Loafing
Today's focus was lots of R&R by the fire, a little wand toy action and snacks. It may look like spring back home, but up here on the northern Minnesota shores of Lake Superior, it's a chilly 20 degrees. Nothing beats a soft spot in front of a roaring fire. Add in a few sun puddles... this just might be the best place on earth.

Katie continues to surprise even Waffles with her comfort and command of our vacation castle. In fact, Glogirly and Gloman claim they've never seen her more comfortable and relaxed. Waffles has settled in nicely too, but according to Katie is WAY too needy. After singing the songs of his people, he makes a visit to Glogirly's face and Gloman's lap to remind them that he's here. Again and again and again.

Despite how large our condo castle is, everyone hangs out in the same room. Good thing we've got a king size bed because ... are you sitting down? We're ALL sleeping in the same bed. If we didn't know for sure we were still in Minnesota, we'd swear this was the Twilight Zone.

Need to Catch Up?
If you've missed our previous On the Road with Waffles & Katie posts, we've DVR'd them for you:
1.  Preview: Wait, Did You Say FAMILY Vacation?
2.  Day One: Caturday Road
3.  Day Two: Our New Digs 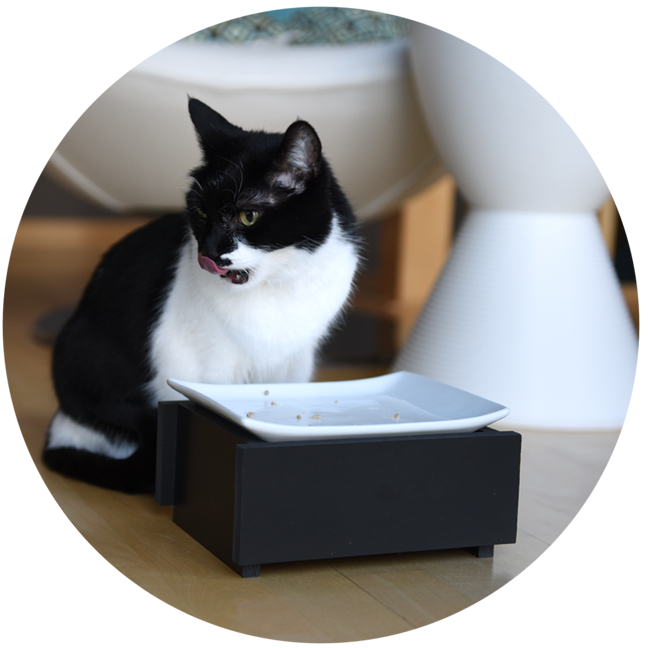 We are LOVING this awesome new feeder designed especially for cats and we think you'll love it too!

Enter to win your own HERE.

Labels: Bluefin Bay, GLOGIRLY-Tails Of A Cat And Her Girl, On the Road with Waffles & Katie