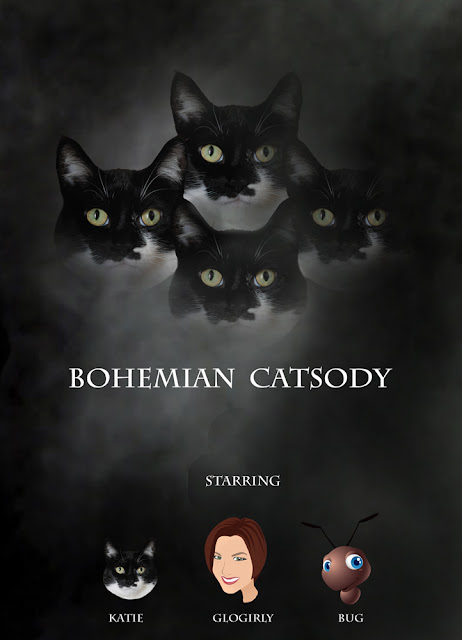 Congrats to Brenda, Boots & Ozzie from Canada, eh. Within seconds of my Name That Tune post challenge, they were tap-tapping away on their computer with the correct answer: Queen's Bohemian Rhapsody.

So find a comfy chair, grab a CATsody-pop from the fridge and turn the volume UP. My latest music video has just been released! At six minutes, I know, it's long. But it's worth every note! There's a special surprise at the end for my friend CK. It's her b-day today, you know.

Don't forget to sing along. You know you want to.

Pee S -
There were a few words in the lyrics we had to Google. In case your enquiring mind wants to know...

Bismallah: It's Arabic and translates to "In the name of God (most gracious and most merciful.)"

Beelzebub: Originally translated in Arabic, Greek and Latin as "Lord of the Flies." In later Christian sources, he appears as a demon.

Figaro: From Mozart's comic opera, The Marriage of Figaro. Figaro is almost swindled into marrying his own mother.

Labels: Bohemian CATsody, Bug, GLOGIRLY-Tails Of A Cat And Her Girl, Katie