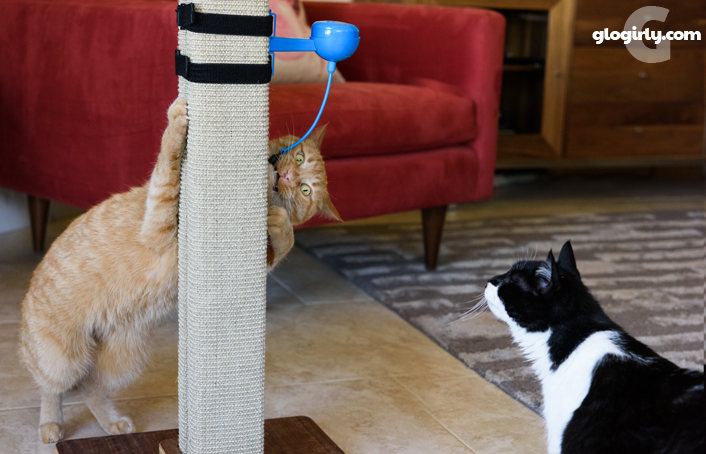 KATIE:  Not that you don't often look, you know...crazy. But this is a whole new level of crazy. 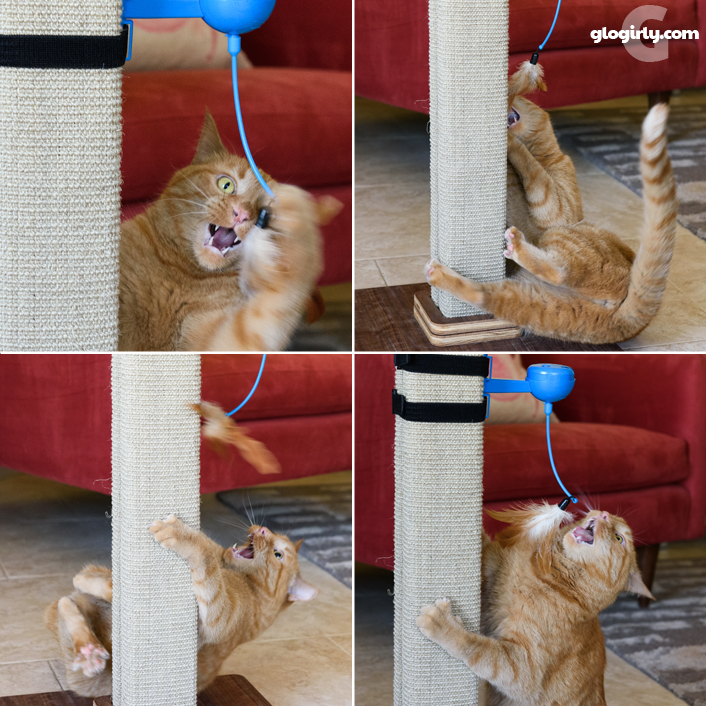 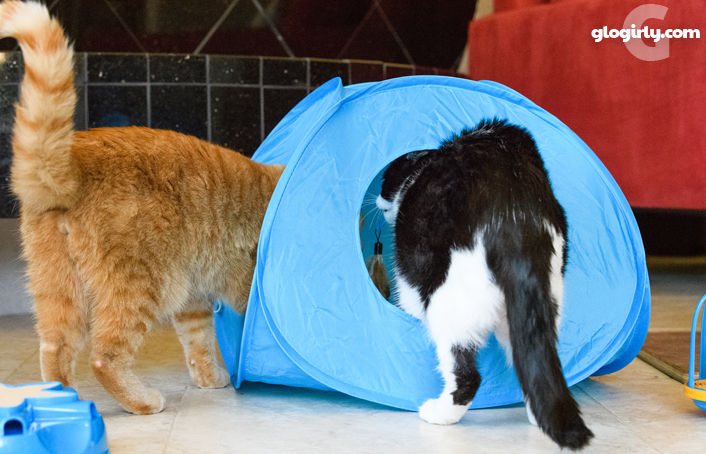 KATIE:  You're scaring me, Waffles. 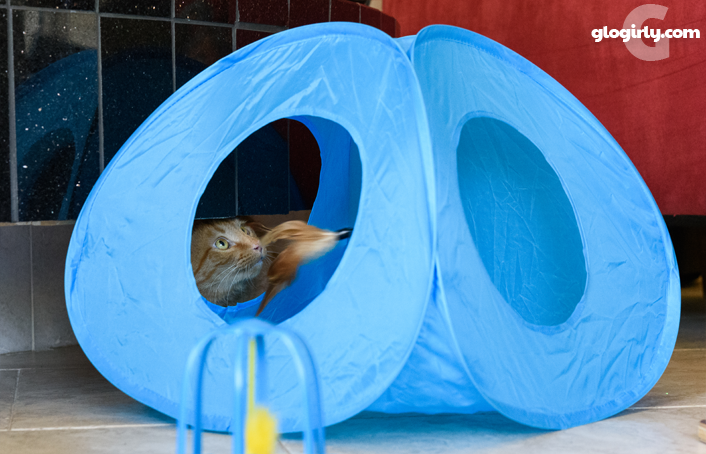 WAFFLES:  And it's spinning! 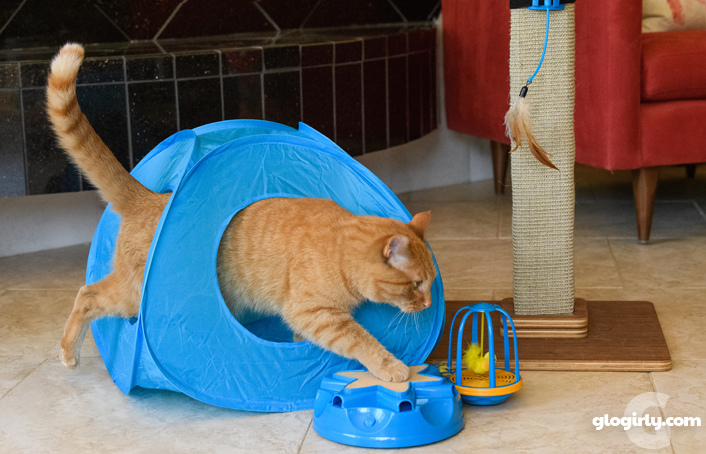 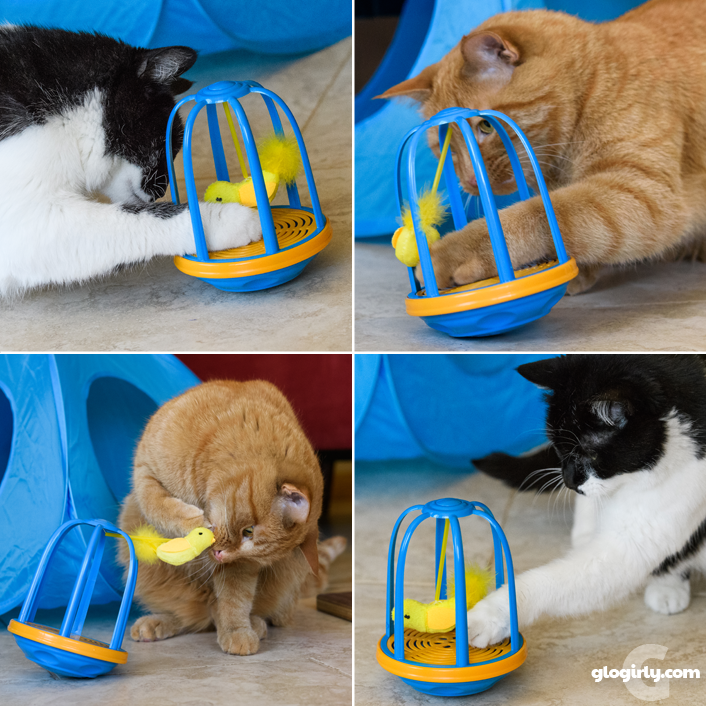 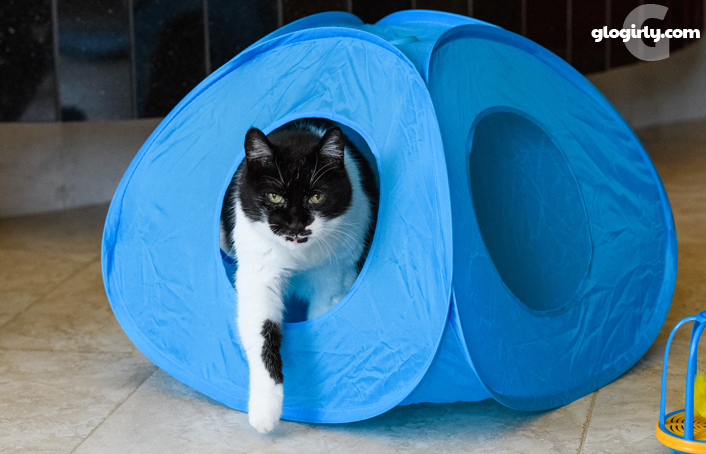 KATIE:  Tell me you didn't eat the bird. 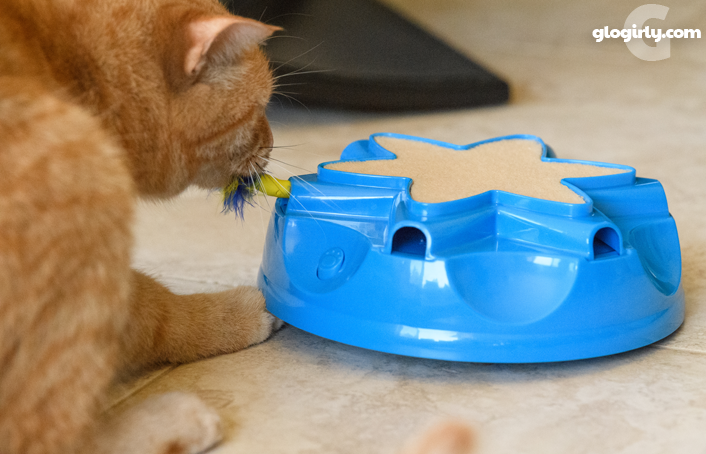 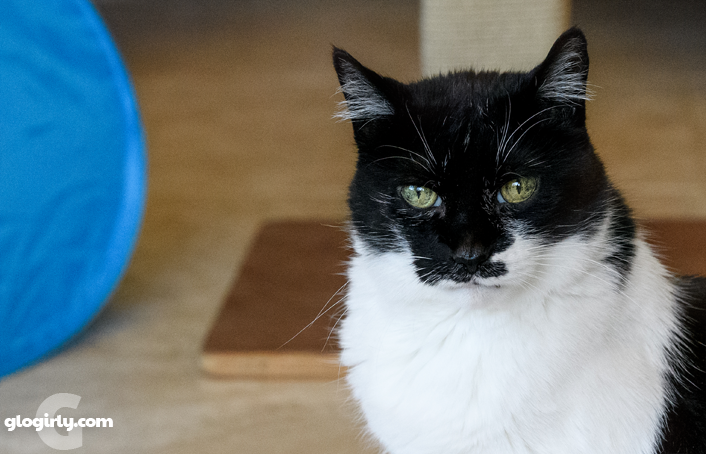 KATIE:  See? I told you he was crazy– 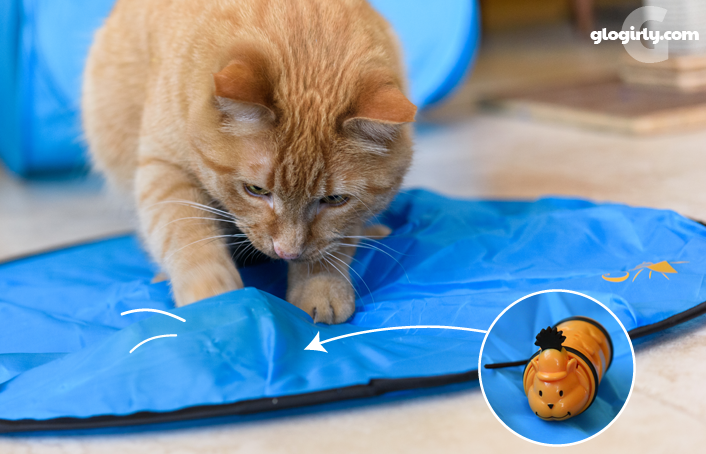 Born to Hunt, Pounce, & Play
Cats are natural hunters. And play that mimics that natural instinct exercises a cat's body AND mind. What we love most about the OurPets electronic toy collection is how each toy engages Waffles and Katie in fun and healthy play by tapping into that innate hunter instinct.

The nice people at OutPets send us their entire collection of interactive electronic cat toys to try out. Waffles and Katie really hit the jackpot. In fact, Waffles is still recovering from the frenzied photo shoot. And he's still playing - morning, noon, and night.

Each of the toys has either movement action, sound, or both. They take regular batteries, which we love because they're easy to get and we usually have extras on hand. (AAAs, AAs, and Cs, depending on the toy.)

They're designed to shut off after 10 minutes and Waffles made sure Glogirly knew exactly when they shut off. He'd find her and start meowing, getting her to come over and turn them on again.

Waffles' Signature Game
Waffles was SO enthralled with the toys, he even created his own new game by combining two of them: The Catty Whack Sound and Feather Action Toy and the Pounce House.

Our Take on All 5 Toys
When we received the cornucopia of OurPets electronic toys, we were pretty sure a couple of them would be a big hit. Little did we know, they'd ALL be winners. But they really are. Kudos to OurPets for coming up with a variety of interactive toys that cats can really connect with!

Here they are, with our own description of each below– 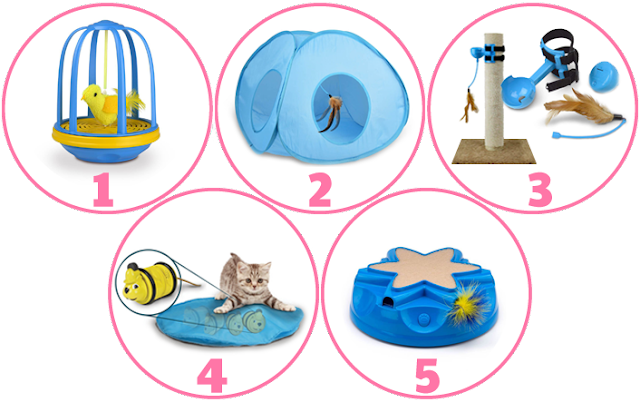 The little bird wiggles and tweets. The base is made to tip while kitty paws at it, but not tip over. It will right itself and stand back up on it's own. This toy was Katie's FAVE.


2. OurPets Pounce House Electronic Spinner Cat Toy
There's a little pocket on the top of the house where the feather spinner is placed. It's spins around, pauses, and spins some more. Waffles really enjoyed pouncing the feather, but he also loved just hanging out in it. Sometimes to rest, and sometimes to stalk one of the other toys. He really loved pouncing on top of it too. Hence the name! It will squish down and collapse when pounced on, and then it pops right back up into place.

3. OurPets Twirl & Whirl Electronic Spinning Interactive Cat Toy
Ok, this one sent Waffles into a scratching post FRENZY. It's easy to set up. Just strap onto any scratching post and turn it on. Waffles went so nuts with this one, he had to lay down and rest. ...watching it every second. As soon as he caught his breath, the frenzy continued.

4. OurPets Mouse in Pouch Electronic Action Cat Toy
Both Waffles and Katie love stalking and pouncing on something they can't see. Like when Glogirly is making the bed and wiggles her fingers under the covers for them. This toy is similar in concept, but not nearly as risky when it comes to fingers! Just turn on the little mouse toy and slip it inside the pouch through a hidden opening. He scurries, spins, and squeaks.

5. OurPets Catty Whack Electronic Sound and Feather Action Cat Toy
This one was a HUGE winner with Waffles. As we mentioned before, he even invented his own game with it. The little feather pops randomly out of the holes on the sides, while making a chirping sound. It's very fast. Half the fun is just stalking it. When Waffles caught it, he didn't want to let go!

Rebate Gift Card for PetSmart
Click HERE for a $5.00 rebate gift card from PetSmart when you purchase an OurPets toy at your local PetSmart store. (E-commerce/online purchases do not count.) 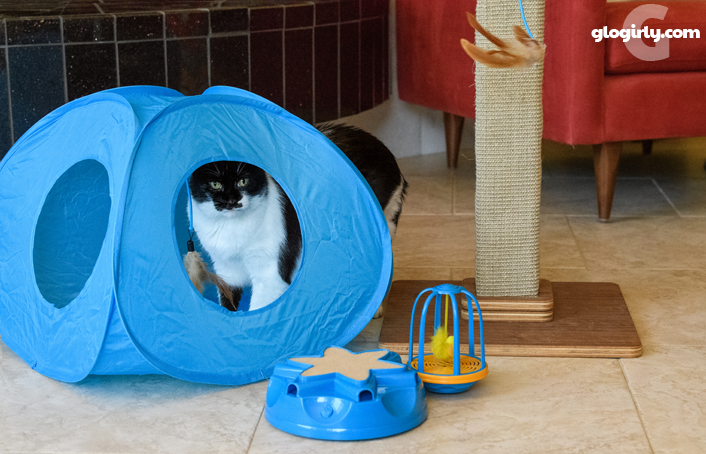 FTC Disclosure: This post is sponsored by OurPets®, which means that we were paid to create and feature this content. Regardless of the payment received, we only feature products and services we use and/or feel are relevant to our readers.

Labels: GLOGIRLY-Tails Of A Cat And Her Girl, Product Review