Pioneer Cats - Behind the Scenes of the BIG Snow 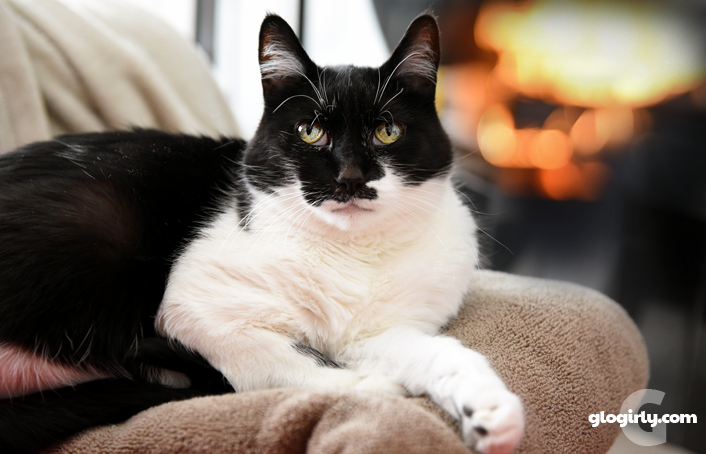 KATIE:  Many of our friends and readers heard about the big spring snowstorm we had here in Colorado last week. It was so bad in fact, that we had to enlist the help of Faraday from A Tonk's Tail to post a snow update for us on our blog Friday. WAFFLES:  You mean on account of we were too busy laying around by the fire to do our own blog? 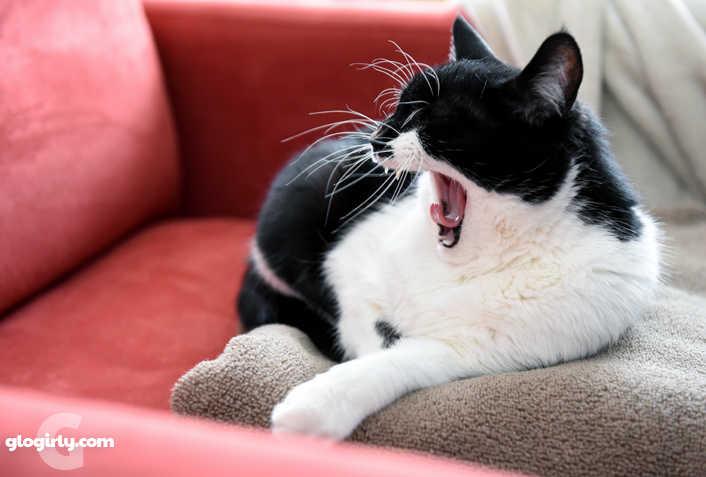 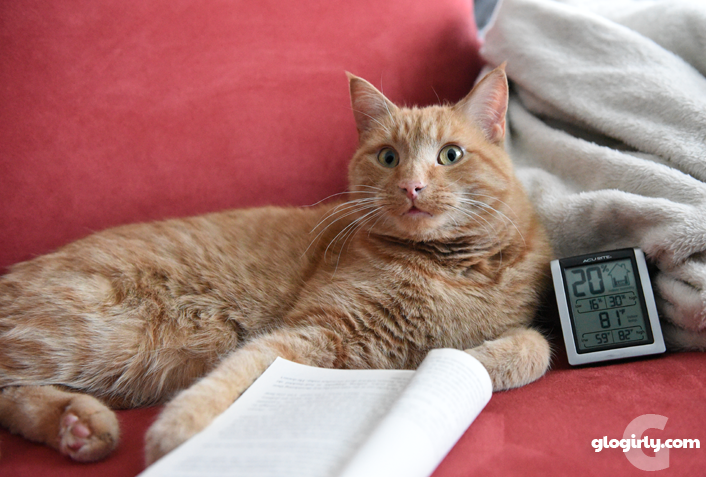 WAFFLES:  You mean on account of there was no electricity or internet or TV or Netflix or anything and all we could do was lay around by the fire and look at these weird paper things with words on them?

KATIE:  Waffles, I think the heat of the fire is impairing your–

WAFFLES:  What, the thermometer thingy says it's only 81 degrees by the fire. 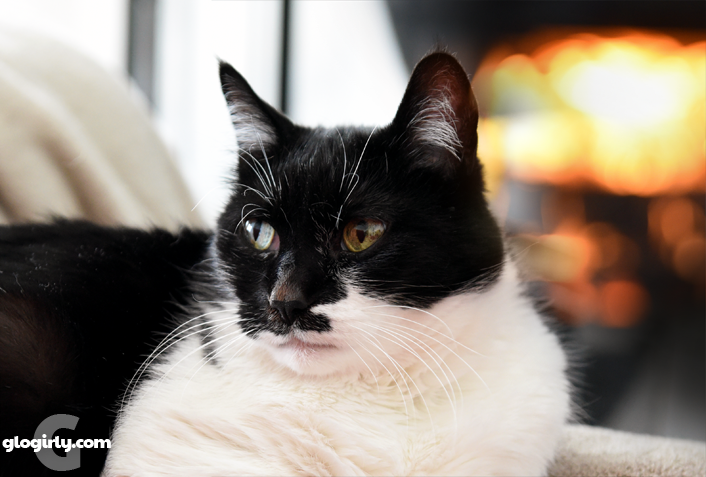 Roughing It
We're not afraid of a little snow. We're not even afraid of 3 feet of snow, which is how much fell on us in just a day and a half last Wednesday and Thursday. But it was heavy, wet and apparently did a number on our power company and their equipment.

Nearly our entire canyon was without power for anywhere from 12-24 hours. We never realized just how many things were tied to power up here up in the mountains. Although our heating source is propane gas, we need power to run the boiler. All of our water comes from our own well and in order to get it running in the house, we have a well pump that requires...you guessed it, power.

To make matters worse, when the power first came back on it only lasted about 60 seconds. Then there was huge BOOM. A nearby transformer had blown and we experienced a power surge that fried our boiler (our heat source), our well pump (our access to water) and even our kitchen cooktop. Two months ago, Glogirly had the power company install a whole-house surge protector so nothing like this would ever happen, but something went wrong.

We have a fireplace with a heating insert, so as long as we have wood, we can keep relatively warm. Right by the fire, it's super toasty. The rest of the house dipped down to about 55 degrees at it's coldest.


REALLY Roughing It
When you don't have running water though, it's like taking a step back in time to the days of pioneer cats.

Ok, sort of pioneer days. Glogirly couldn't take a shower, so she heated up water in the microwave (because the cooktop doesn't work) in order to take sponge baths without freezing. She had to do the same to clean our food dishes.

But then came the toilet.

Without running water, there's no flushing. You have to add water manually. And would you believe it takes about a whole gallon of water to flush the toilet just once?

We only had 7 one-gallon jugs of drinking and distilled water on hand. And we had no idea how long we'd be in this predicament, so in order to conserve water, Glogirly filled big plastic storage bins with snow to melt for water to flush the toilets. FYI - It takes a LOT of snow to yield just a teensy bit of water, so we had bins of snow all over the place. 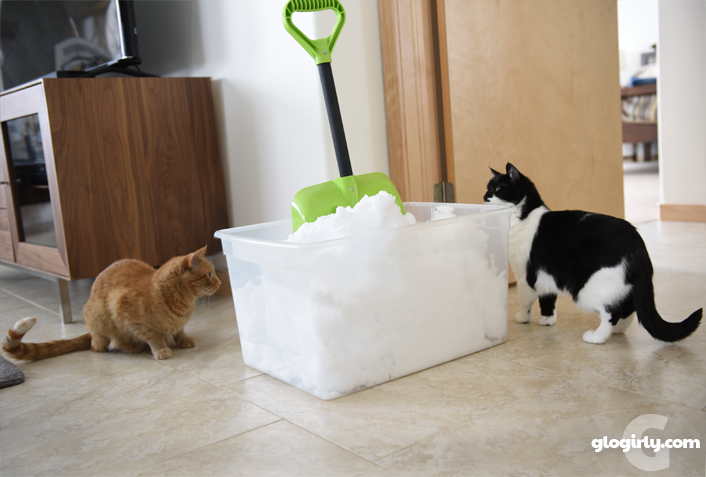 WAFFLES:  What's with all the snow, Boss?

KATIE:  It's so Glogirly can use the bathroom.

WAFFLES:  You mean like a LITTER BOX??? Won't that be really cold on her– 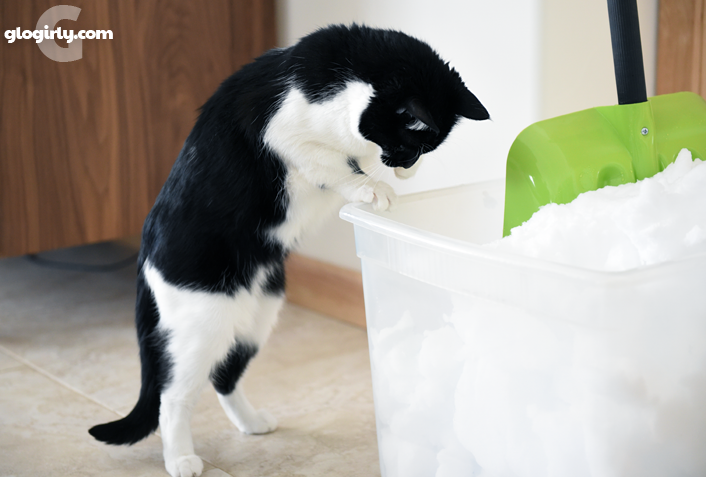 KATIE:  NO, Waffles. She's melting the snow so she can pour it into the toilet and have enough water to flush.

WAFFLES:  That's crazy. She should just use our box.

KATIE:  Trust me, I'm sure that thought has crossed her mind.

Back in Business, Almost
It was touch and go for awhile, but as of Sunday afternoon we had heat and water once again. It's going to be a couple of weeks on the cooktop though. Fortunately, the microwave and convection ovens are working just fine, so it's frozen TV dinners and Digiorno for the time being.


Scenes from the Big Snow
At the risk of making this the longest blog post in recorded history, we though you might enjoy a few photos of the aftermath. 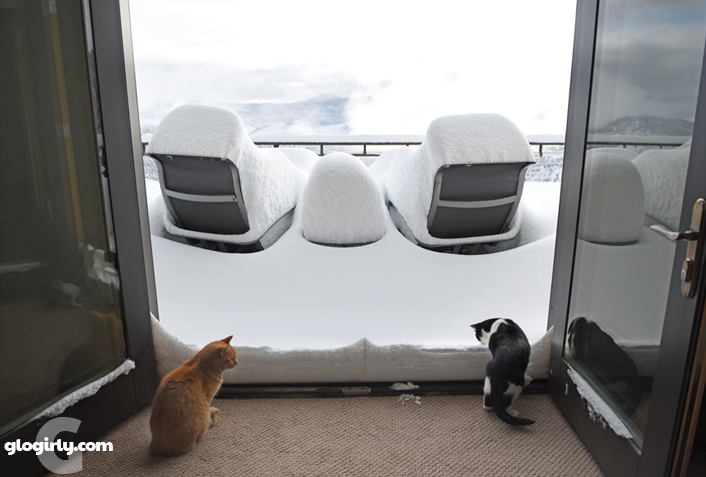 WAFFLES:  Are you going to touch it, Boss?

WAFFLES:  But it's...it's cold on my delicate toes.

KATIE:  Seriously, Waffles. Do I have to do everything around here?


P.S.  Not to worry, the snow melts FAST here in the mountains. In fact, about half of it is already gone. With temperatures climbing to the 60s and even 70 by mid week, this soon will all be just a distant memory.