The Ball in the Toy Goes Round and Round ♩♫ 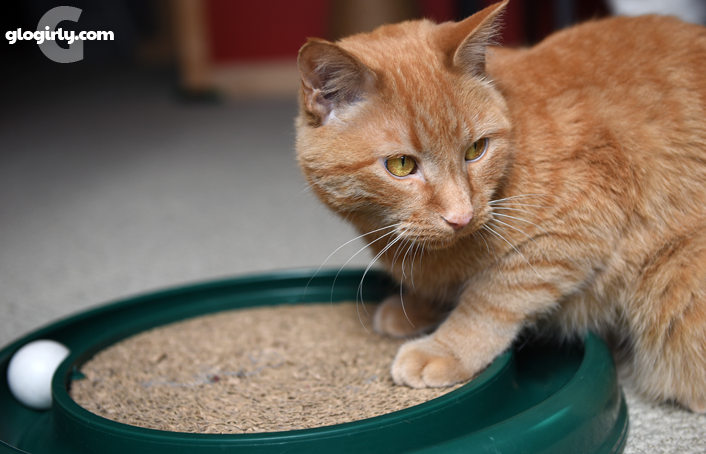 WAFFLES:  *looks both ways* I don't see the Boss, do you? 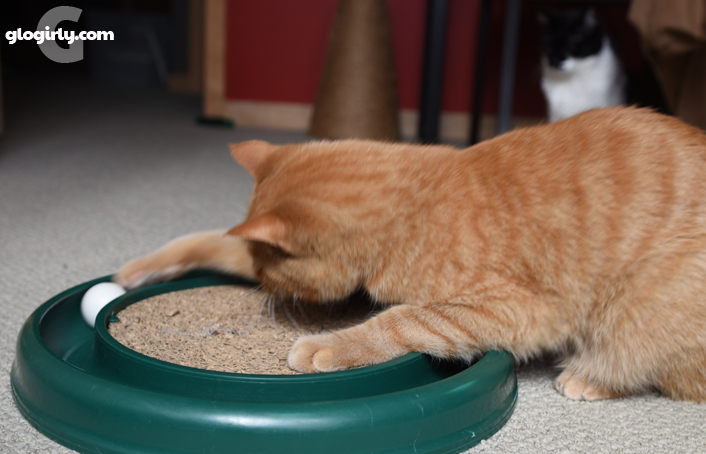 KATIE:  Right behind you, Waffles. 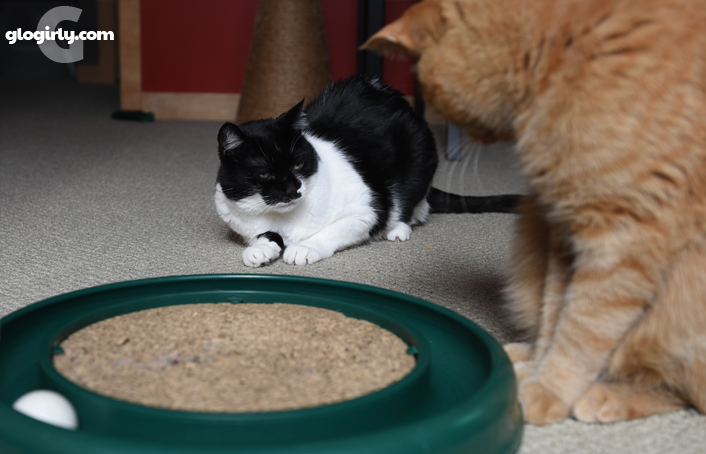 WAFFLES:  I was just admiring your spinny-ball toy, Boss. 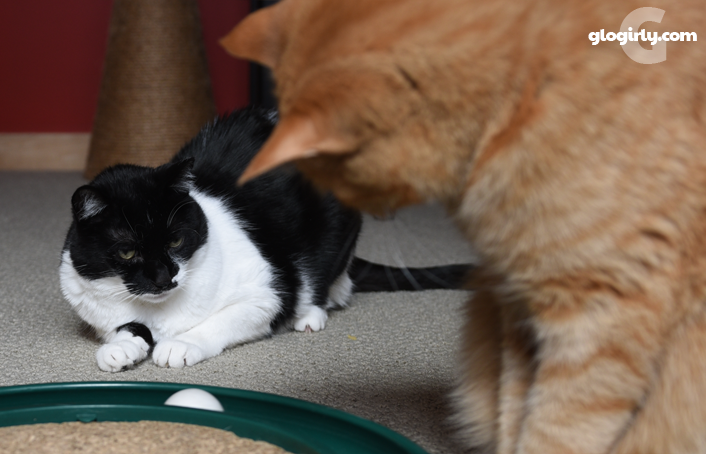 KATIE:  Yeah, I think you were doing a little more than admiring, Waffles. 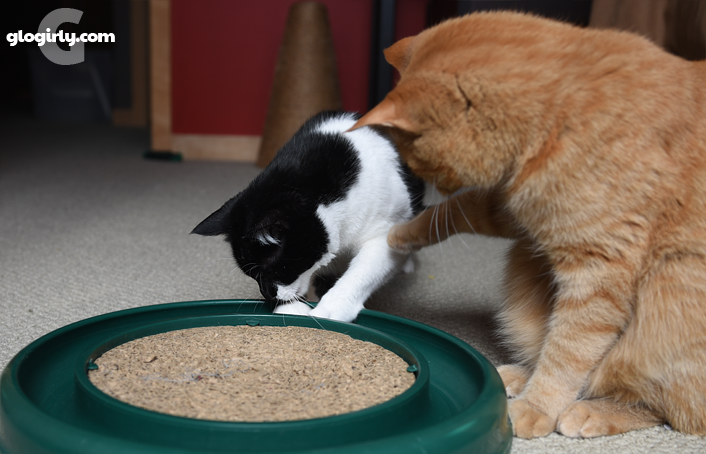 KATIE:  Then why is there orange fur on the ball? 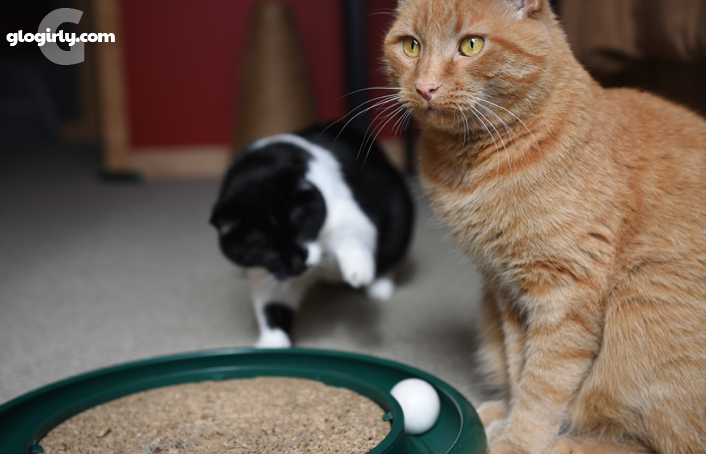 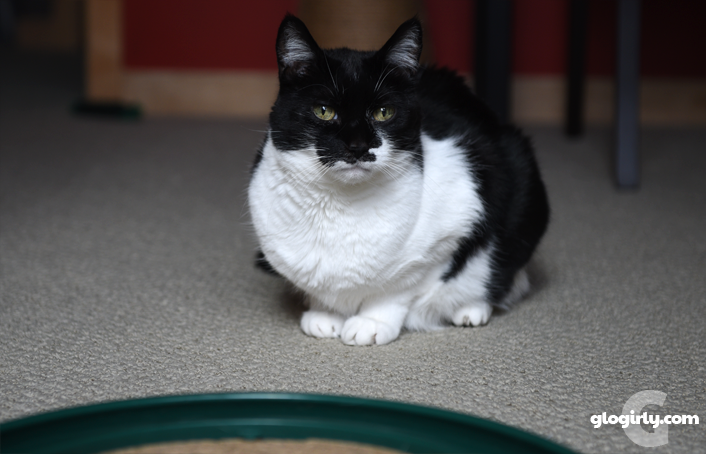 KATIE:  Somedays all I see is orange.

About Today's Photos
Glogirly got on a cleaning and organization kick this past weekend. Long story short, she unearthed countless cat toys that have gone missing over the years, including a very special one. Katie's turbo ball scratcher, a.k.a the spinny-ball toy. You could say it's almost an antique, but don't tell Katie that. It was one of her very first toys from when she was a tiny kitten.

She LOVED it. Even as a little kitten-tot she could get that ball speeding around the track in a blur.

When Glogirly discovered the long lost toy buried deep beneath the guest bed, she pulled it out and set it on the floor. Waffles of course was right on top of it, checking it out and teaching himself how to play.

When Katie heard the sound of the ball something amazing happened. Something that literally has never happened before.

Katie came running and leaped into the action. She took command of the toy while Waffles just sat back all dazed and confused. What had just happened? Usually timid when it comes to toys, and certainly not a gamer who enjoys playing with her orange housemate, Katie engaged not only with the toy but with Waffles too. For a few minutes they were actually playing together. 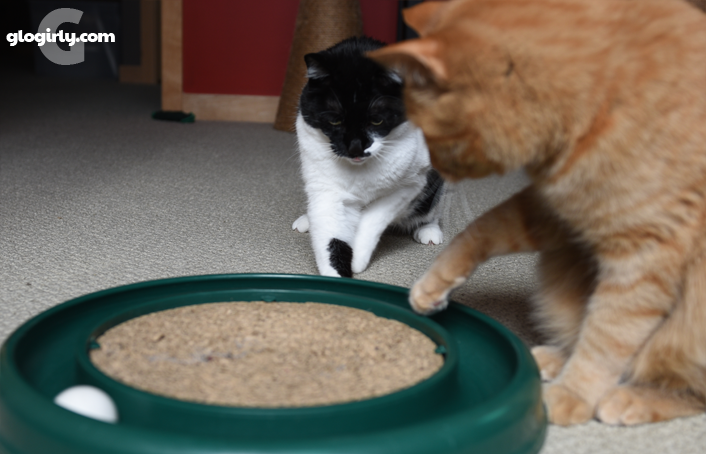 AND, we have photographic proof.

Either we're nearing the apocalypse or we should all go out and buy lottery tickets.