Not long ago on Facebook, we were asked about how the name of our blog came to be. Some of our blogging friends name their blogs after a cat, a dog, a place or a funny phrase. The stories behind the names are fascinating. It was such a fun discussion we wanted to share our story with you. Now some of you who've known us for awhile have probably heard this story, so we made sure to throw in some very handsome photos of Waffles and Gloman for you. And of course, some classic Katie too.

So it only made sense that when the boy asked the girl to marry him, she would become Glogirl by default.

Fast forward seven years when Glogirl found herself in the midst of a daunting career change. Never having blogged before, in fact never having followed a blog, she decided the next chapter in her career might involve social media so just maybe it would be smart to start a blog. She thought it would be a nice digital playground to become a better writer, photographer and designer.

So the girl went domain shopping. But to her shock, glogirl.com was taken. What??? How could there possibly be another Glogirl? Suddenly she had to reconsider her whole identity.

Since her BFF calls her Girly, she added a Y onto her nickname. She purchased glogirly.com and GLOGIRLY, as you know her, was born. Truth be told, she really likes Glogirly much more...it definitely suits her personality and combines her love for Gloman with her love of being a girl. Even when she's 80 years old, she says she'll still be a girl. Blind optimism or stubborn denial...we'll let you decide.

That Defining Moment
So the girl had a name for the blog, but she had no idea where to begin or what to write about. While she sat staring at a blank screen, Gloman chimed in with a suggestion that in a single moment changed the course of our lives. He said, "Why don't you have Katie introduce the blog?" 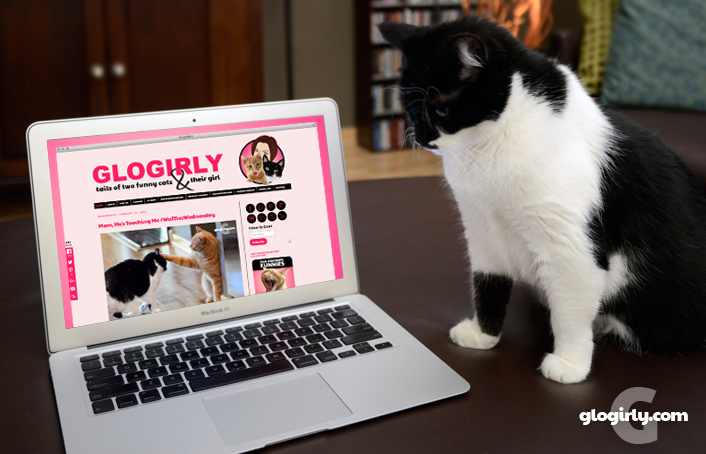 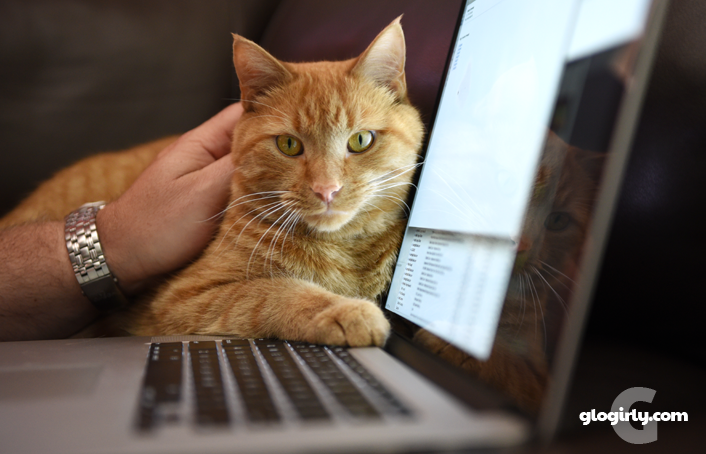 The Orange Invasion
When the orange fur storm known as Waffles blew into the Townhouse a few years later, a whole new voice was born. A silly, innocent and full-of-life counterpoint to Katie's no-nonsense style of articulate sarcasm.

Somewhere along the way, Glogirly added a tagline to our blog name. 'Tails of Two Funny Cats & Their Girl.' Mostly as something to help first time visitors know what we're all about. Experts have suggested we add 'Cats' to our URL. And one of these days when you come visit, you may see that little change in our web address. But not until we catch up on all our catnaps and playtime. Priorities, you know.