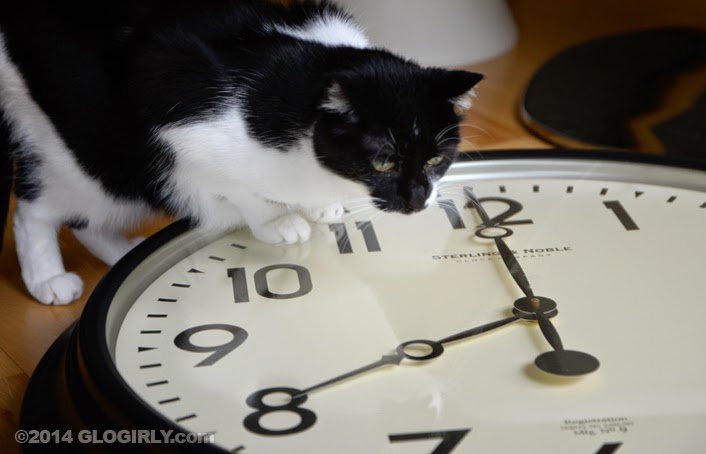 KATIE:  So Waffles, do you know what time it is?

KATIE:  It's time to turn back the clock. 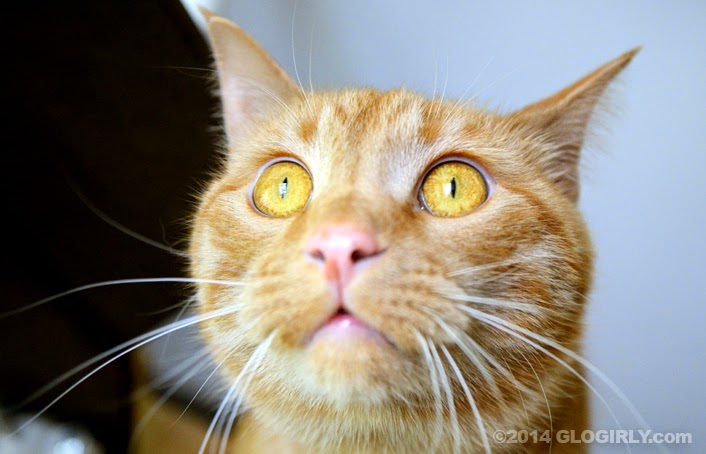 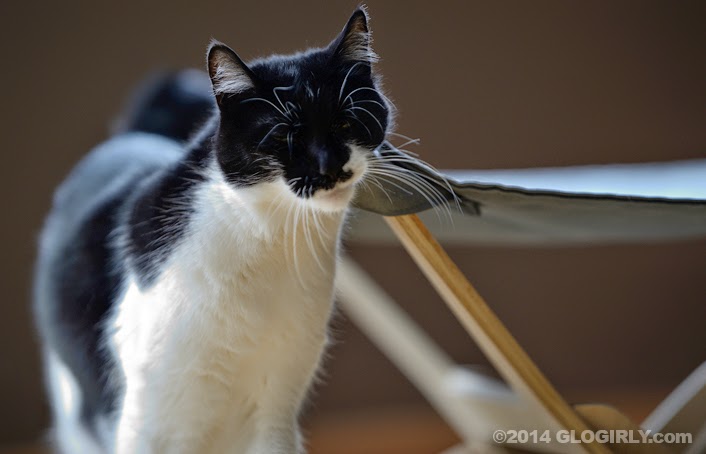 KATIE:  Haven't you noticed anything different about me?

WAFFLES:  You mean like, you've been more bossy than normals?

WAFFLES:  Oh yeah. You mean not so OLD.

KATIE:  *shakes head*  Ok Waffles. How about you make like Vanna White and zip it on the dialogue? 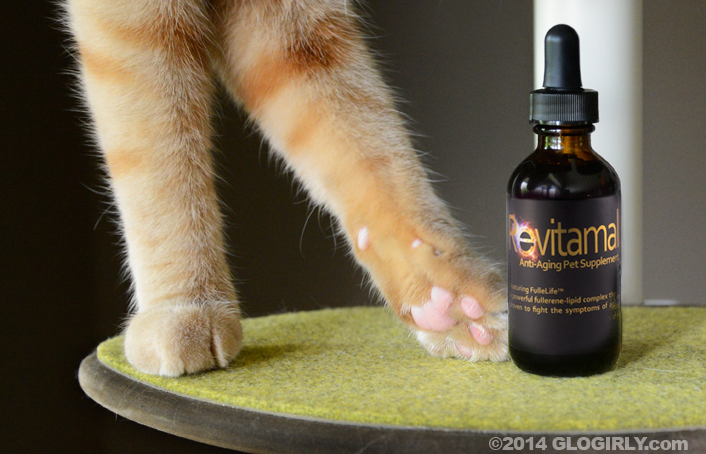 KATIE: On Restoring Youth & Vitality with Revitamal
For the past 10 days, Glogirly has been adding Revitamal Anti-Aging Pet Supplement to my breakfast. I know what you're thinking... Anti-Aging?  Fountain of feline youth??? I'm only 9 years-old, not 90. We were skeptical too.

The people at Revitamal were very sincere though and forthcoming with great information about their product and some impressive testimonials from pet parents who saw a turnaround in the lives of their aging or ailing pets.

What Does It Do?
• Restores function, comfort and energy.
• Removes toxins and supports healthy cellular maintenance.
• Compliments and enhances the effects of other treatments, like prescription medications.
• In fact, no other supplement has been documented to produce such extreme gains in lifespan, while preventing diseases typically seen in aging animals. 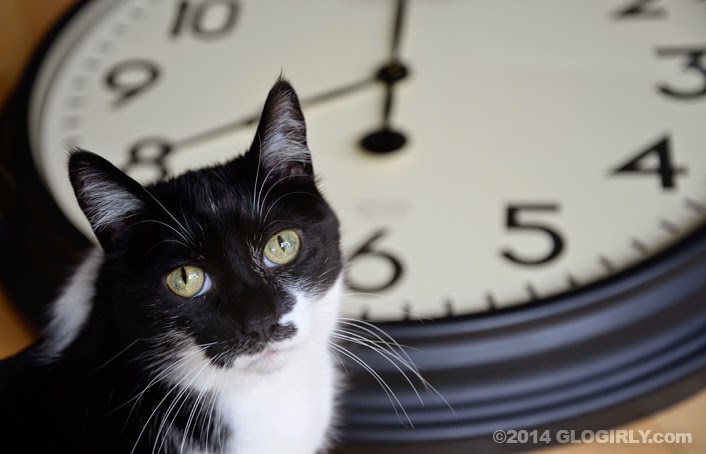 "Who are you? And what have you done with Katie???"
– Gloman

KATIE:  Glogirly and Gloman have witnessed what they describe as a noticeable difference. Though it's a little disconcerting to hear they think I've somehow *changed.*  According to Glogirly, it took about seven days to kick in. She's calling it a spring in my step, a renewed confidence... I say there's was never anything wrong with my confidence. OR my step.

WAFFLES:  Um, Boss?  Your steps were getting kind of old. 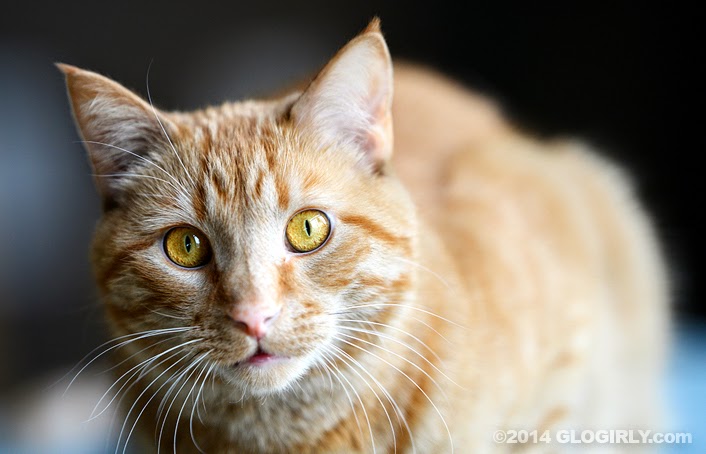 WAFFLES:  The Boss has always been, well.. you know. Kind of a loaf. Um, I mean aloof. Well kind of a loaf too. But lately, she's not nearly as loafy.

... She's Around a Whole Lot More
She's hanging out where the action is. She still doesn't like the doorbell, but she ate her breakfast in front of a stranger this morning - the electrician. Before, she would've waited upstairs until he left. And I would've gotten TWO breakfasts.

... She's Kind of Nicer
The Boss will never have MY mad skills as a lap cat, but she's been letting us all touch her lately. Ok, mostly letting Glogirly and Gloman touch her. She still isn't a fan of me and my sticky paws.

... She's Been Working Out
She's playing WAY more than usual. With all sorts of toys. And running too. After me. 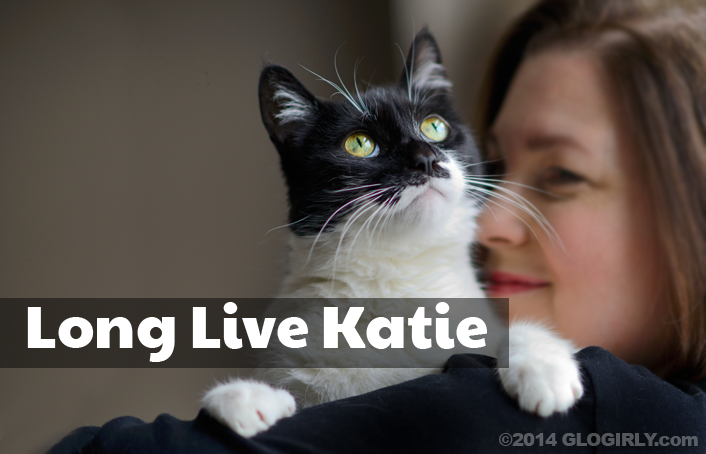 KATIE:  Glogirly's very excited about Revitamal and plans to continue using it. It just might give me and her more time together on this earth.

WAFFLES:  So now that you're all kinder and gentler and stuff...do I have to still call you Boss?

Revitamal GIVEAWAY!
One lucky GLOGIRLY reader will win a bottle of Revitamal to try out for themselves! ...well, actually for their pet. Revitamal is safe and effective for all pets except fish. Winner must live in the US, however overseas readers are welcome to enter and gift their prize to a US friend or shelter.

This post is sponsored by Revitamal and the BlogPaws Pet Blogger Network. We are being compensated for helping spread the word about Revitamal, but GLOGIRLY only shares information we feel is relevant to our readers. Revitamal and AdaptoGenerations Inc are not responsible for the content of this article.