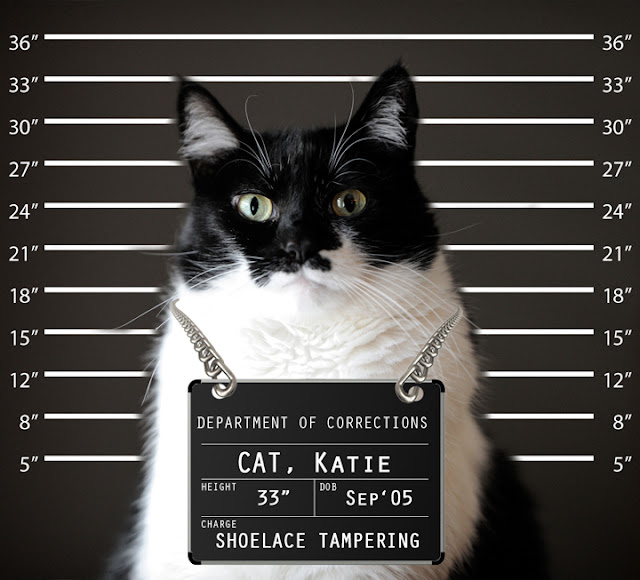 The evidence is circumstantial. Wrong place. Wrong time. I did NOT have inappropriate contact with those shoelaces. I've been framed.

The evening was unremarkable.  Gloman and Glogirly dined on TV dinners, watching Mad Men on the DVR.  They retreated upstairs. Glogirly attended to her blogging tasks in bed. Gloman packed for a trip. His tennis shoes sat on the floor in plain view, next to the suitcase.  A bowl of popcorn and a Coke Zero later, everyone was asleep.

Morning came and the accusations started flying.  Someone had allegedly chewed on Gloman's shoelaces. There was talk of DNA evidence, saliva.  Trace indications of black and white hair.  A nondescript cat toy positioned "randomly" next to the shoes. 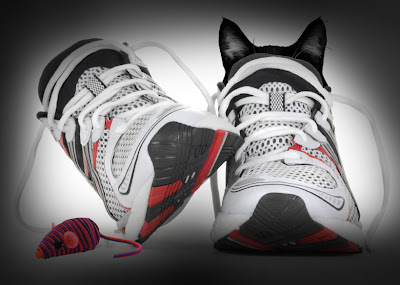 No legal representation. No judge. No jury of my peers.

Not even a consideration of what may have REALLY happened.

Gloman, he gets hungry in the middle of the night and it's a long way downstairs to the kitchen.  He's partial to angel hair pasta.  And have you SEEN his hair?  Mostly white with a few fleeting strands of black. And that toy? Come ON. Why not just wrap the whole crime scene up in a box and tie it with a pretty ribbon.

Oh. That's right. I've got a "prior" with a three foot strand of ribbon. Yeah, I ate it. It was pink, ok?  After the ribbon was surgically removed, the stupid Vet actually GAVE it to Gloman as a some kind of sick souvenir.  It's hermetically sealed in a Ziploc bag and tucked inside one of his drawers in the garage.

May as well be hanging around my neck.

Labels: Framed, GLOGIRLY-Tails Of A Cat And Her Girl, Gloman, Mug Shot