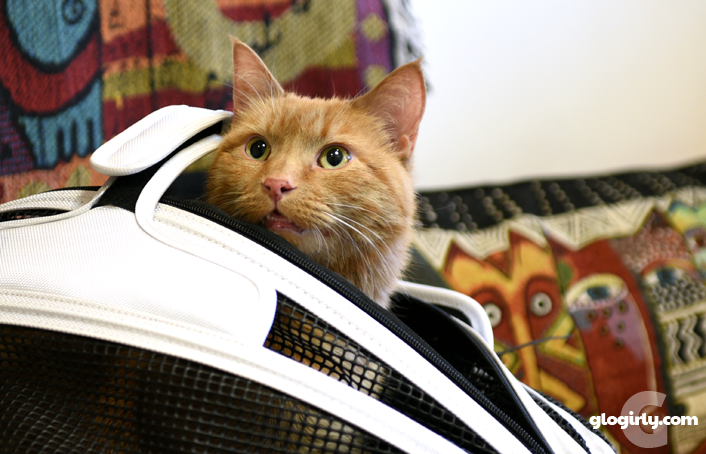 WAFFLES:  Check it out Boss! I'm a SUPERNUMERARY Cat! I think that means I'm super good at math and numbers and stuff. You know, like when I count to elebenty hundred chicken drumsticks. 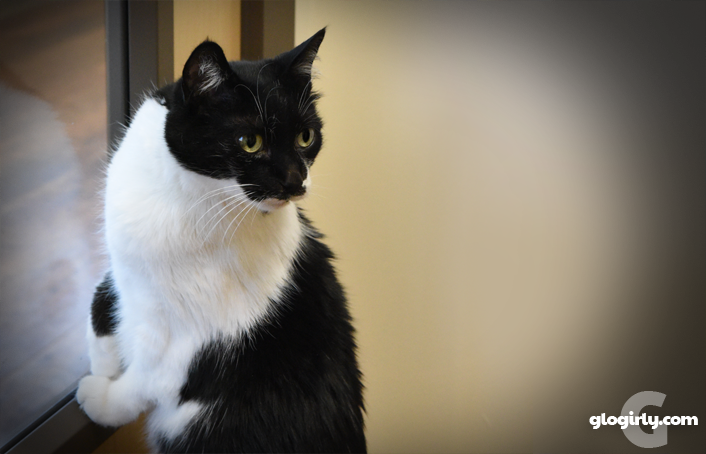 KATIE:  Supernumerary? Supernumerary has nothing to do with your less than average math skills, Waffles. It means you have double teeth! 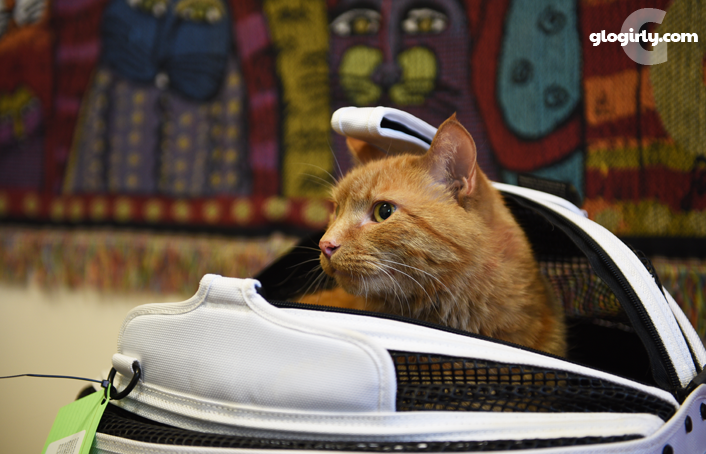 KATIE:  I don't think it works quite like that, Waffles.

Waffles and the Big Dental Surprise
On Wednesday, Waffles went to the vet for a full exam, bloodwork, and a dental cleaning. We've always known Waffles is a unique little guy with a personality larger than life. What we didn't know, and neither did our vet, is that he's more unique than we'd ever imagined.

Waffles had something called Supernumerary Teeth. In simple terms, it means double teeth. Where there should be one tooth, there are instead two side-by-side. It's quite common in dogs, but rare in cats. In fact, our vet has only seen it in one other kitty client.

Apparently, there was a lot of excitement in the surgery suite. Everyone at the clinic wanted to see what was going on. One of the vet techs couldn't wait to show us a photo she took of Waffles' double teeth before they were extracted. 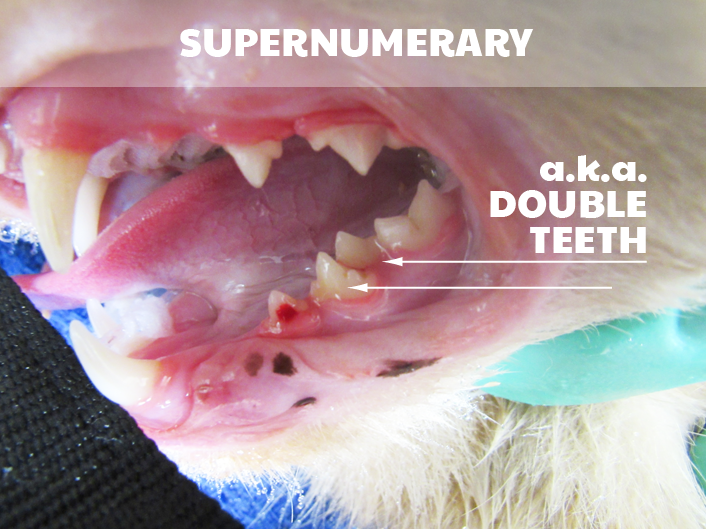 It sounds very special, but unfortunately, it can cause a lot of dental problems. The teeth can be very crowded, and in Waffles' case, the double teeth had become a virtual food and bacteria trap. Both had become decayed and infected. They'd also caused trouble with the tooth in front and in back of them. So despite their specialness, they had to come out.

Here's a diagram showing what all the teeth in a cat's mouth are called and where they're located. Waffles had four extractions: 308 and 308b, the supernumeraries, the 309 Molar, and the 307 Premolar. The entire bone line under those four teeth had become thickened and unhealthy. So after the extractions, it was burred away prior to closing. 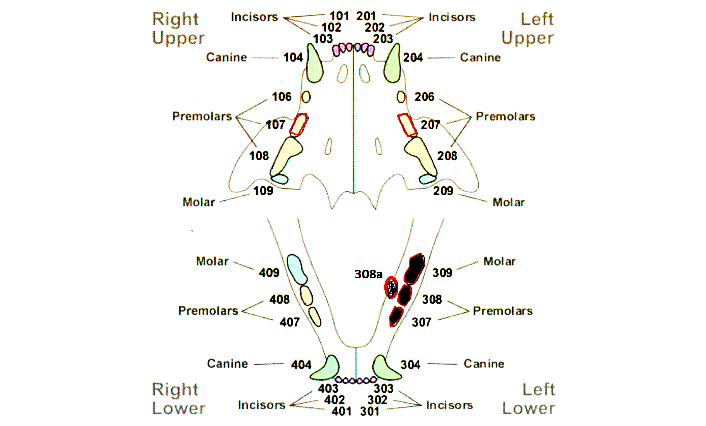 And if the supernumerary teeth weren't enough of a surprise, Dr. Fern couldn't believe her eyes when she looked at a radiograph of his upper teeth. 107 and 207, the Premolars circled in red have three roots each, as opposed to two roots. They're totally fine and healthy. But like Waffles, a little unexpected and unique.

A Purr-fect Health Report Card
Our vet said he did great and was very cooperative with the exam and blood work they did before the procedure. His results came back with flying colors. Perfect results, perfect weight, and healthy in every way. 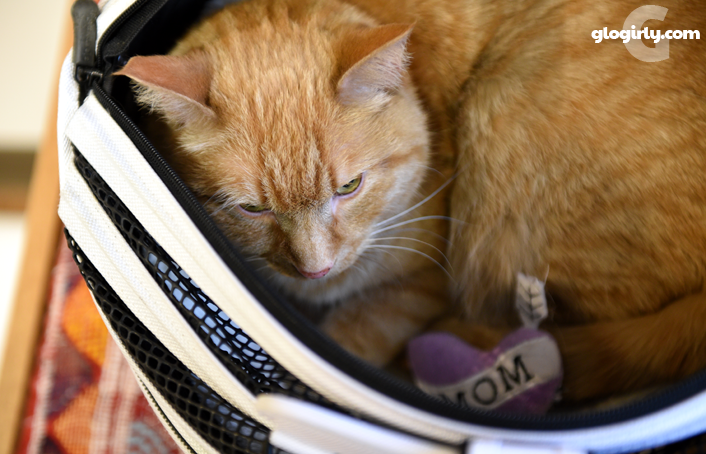 Recovery
Waffles is home and doing great. It was a pretty significant procedure, one requiring a general anesthetic, so he's not quite himself yet. He's on pain medication and an antibiotic for the next few days.

He's been hanging out with Glogirly, cuddling up next to her whenever she sits down. As we're writing this, Katie is even laying next to him on the sofa. 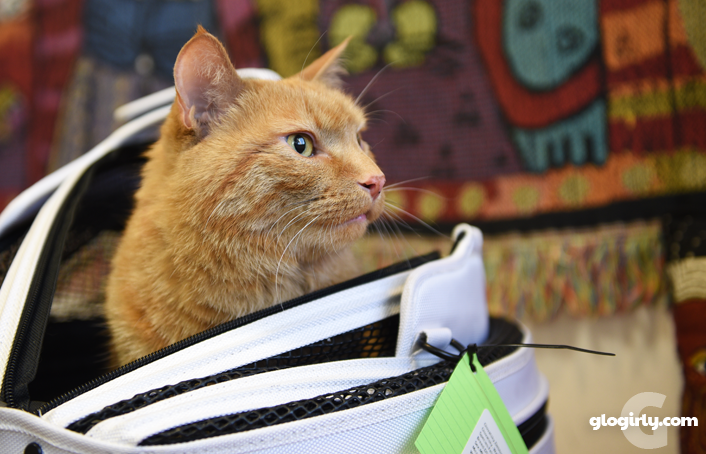 Special Thanks to Uniquely Cats
Special thanks to Uniquely Cats Veterinary Center of Boulder. Our rockstar vet, Dr. Fern, and her wonderful and caring staff are the best. Not only are they experts and on top of their game with the latest and most advanced technology in feline medicine and care, they treat us like family.

Waffles had to stay at the clinic for observation after his procedure. One of the vet techs gave him his own private room to relax in. He had his Sleepypod in there, his food, a litter box, and...she even built him a pillow fort so he'd have a comfy place to rest and hide.

She said she'd peek through the window and see two little ears poking up from behind the fort.