An unidentified giant dog is reportedly behind a near fatal attack on two flat cats at the BarkWorld Social Media & Blogger Conference in Atlanta, GA.  The unprovoked attack took place mid-afternoon, Saturday, while bloggers were enjoying peach cobbler snacks. It is not known whether the crazed dog had gotten into the sticky dessert or if it played a role in vicious confrontation.

The victims are identified as Flat Katie & Waffles from the GLOGIRLY cat blog in Minneapolis, Minnesota. According to onlookers, the flat cats were minding their own business during a snack break when the large dog unexpectedly stormed the cats.

"The dog was gigantic. He was going after the orange one...the orange Flat Cat.  The orange flat cat was helpless. He couldn't fight back, he couldn't even meow for help. And the black and white flat cat just sat there frozen, eyes wide open. It was terrifying."

WARNING: The following image is graphic and not suitable for kittens. 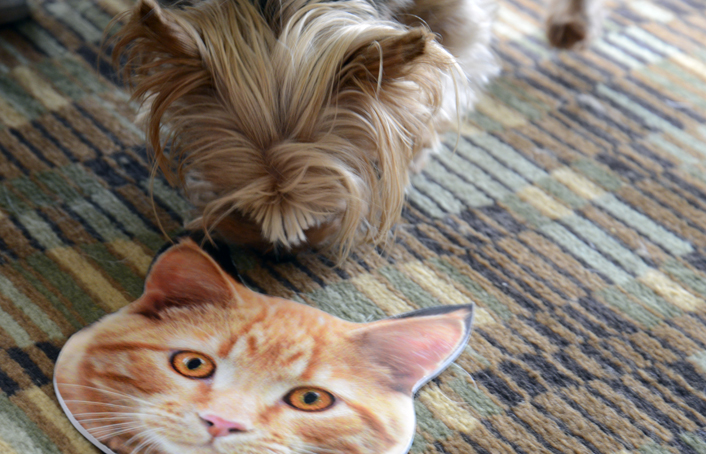 It is believed the giant monster dog grabbed Flat Waffles and threw him to the floor. The attack continued as the dog sniffed and pawed at the victim. Numerous eyewitnesses have reported horrifying growling noises believed to be those of the perpetrator.

Shortly thereafter, the still unidentified dog turned his attention to the other flat cat. As the altercation escalated, a good samaritan sprung into action, rescuing the flat cats before any permanent injuries could be inflicted. Reports indicate that the dog fled before the authorities could contain the scene. The investigation is ongoing. Anyone with information as to the identity or whereabouts of the giant attack dog should leave a comment below.

Flat Katie & Waffles are scheduled to return to Minneapolis today, Sunday, and have been cleared by their flat doctor to fly. They could not be reached comment.

Special thanks to BarkWorld and our generous sponsor, Petco!
Check back...we'll be sharing more exciting news and recaps from the conference.