When the pink Glogirly Design phone rang last week, we were SO excited to hear from our friends Brian and Terry of Brian's Home...one of the absolute best blogs out there.  Brian and his human, Terry, are true advocates for homeless animals.  They make a difference every single day and have hearts of solid gold.

Forever Home Wanted helps all kinds of animals. Cats, dogs, bunnies, ferrets...even horses. This meant Glogirly and I had to start drawing some pets WITHOUT little pointy ears. We doodled around on the computer, played with some ideas. We just love what we came up with and are pleased to report Brian and Terry are thrilled too!

Part of what makes this logo so unique and (we think) professional looking is the use of illustration and a transparent background.  We love how it floats and lets the background of the blog come through.

But enough about logos and backgrounds....let's get to the important stuff!  We figured that since we're new to Forever Home Wanted, you might be too.

Although Brian and Terry have never really publicized Forever Home Wanted, they've had over 4,500 posts so far! I can barely count to 100.

Forever Home Wanted: Starting Out
Brian and Terry started it with two things in mind. First, they wanted to call attention to critters that are searching for their forever homes, no matter where they are located. Second, they wanted to feature news articles that might be of interest to those supporting rescue and adoption efforts. Terry explains, "There is so much great work going on out there, and my hope is that others can learn what is going on and pick up a good idea or two to help with their rescue efforts. While we don't get many comments, we do get lots of emails asking about the pets we feature, and we gladly pass the contact information on to the rescues. It's not unusual to get an email that starts with 'I wanted to let you know that I adopted the cat you listed...' and those always, always make me smile."

Originally Forever Home Wanted was tied directly to Brian and Brian's Home. Brian still sends everything out via Twitter. In the last several months they have started giving Forever Home Wanted it's own autonomy. Terry points out, "It's not always about rescue, sometimes it is just helping out." 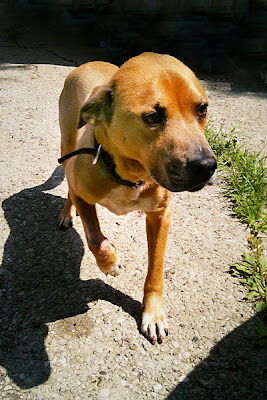 Harlan's Story
I asked Terry if there was one story that stood out among all the animals and people he's touched and helped.  The story of Harlan is one of his favorites.

Brian and Terry received a plea to help Harlan, a poor dog that had gotten out and, unfortunately, was hit by a car. His family loved their doggy so much but could not afford the cost of the mounting medical bills. "With our voice and the generosity of many readers, we were able to make that happen." A few months ago, the person who contacted Brian for help with Harlan posted this on his LinkedIn site:

"Brian came to the rescue when I was trying to help a wonderful dog named Harlan who escaped from a fenced in yard and was hit by a car. He had to have an amputation of a left from the shoulder. The owners wold one of their cars and some personal items to pay for the surgery and follow-up visits, (and the vet was so great about accepting payment in installments without denying Harlan's treatment), but the costs were going to threaten their hose payments (and Harland's home for recovering!) Brian went above and beyond by setting up a donation account and spreading the word. Harlan has his health, bet treatments and home thanks to the wonderful work Brian did and the extreme kindness of strangers who donated for Harlan's care. Brian never asked me for a cent! What a wonderful person. It is a proven fact that those who care for animals are the ones most generous to humans as well, and those who are cruel to animals have a strong tendency to harm humans and be anti-social. Brian is a great example of a loving, caring, professional person who goes above and beyond for animals and for those who love them are are desperate to save their companions' lives. Thank you Brian. You make the world a better place and you give me hope in humanity."
-March 15, 2012.

Yup. A heart of gold. 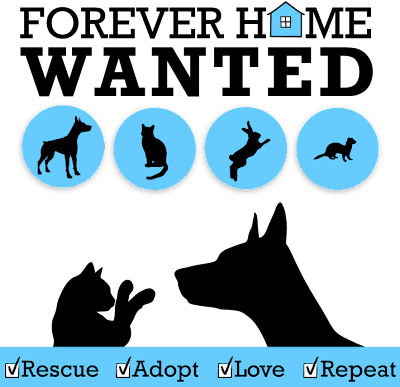 What's Next?
In the near future Brian and Terry hope to establish ForeverHomeWanted.com as the EventCentral of the pet adoption world, offering an easy way for rescue organizations to post and publicize their upcoming events. They are also exploring options for a direct click on the pets they feature that will trigger an instant email to the rescue group when someone is interested in a specific pet. "For homeless pets," Brian and Terry emphasize, "a forever home is the best thing ever, and we hope on being around to help that happen."

We want to thank Brian and Terry for giving us the opportunity to help brand their amazing organization. And we thank them for the remarkable work they do, making a difference in the lives of animals whose greatest need is a home to call their own.

In the words of Brian and Terry:  Rescue, Adopt, Love, Repeat!