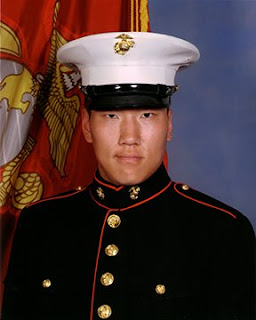 Hi everyone, Katie here.
I'd like to introduce you to PFC Gabe. He is a United States Marine. Cool, huh? When he left for basic training in December, I wasted no time moving into his room. He's the only other human besides glogirly (and I suppose gloman) that I like. He graduated from basic training in March with a Private First Class stripe and a medal for expert marksmanship. Now he gets to tote around this really huge missile thing. Wait, Marines don't shoot cats do they? I better check into that. Gloman and Glogirly are really proud of him. Actually they get a bit gushy for my taste. But I guess it's a pretty big deal, becoming a Marine and all. 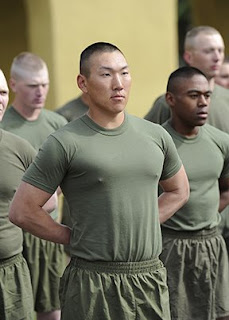 Check out his awesome muscles. He's totally got that tough-guy-leatherneck-don't-mess-with-this-Marine look down, doesn't he?
Don't be scared, he's actually a big sweetheart. Likes cats too. 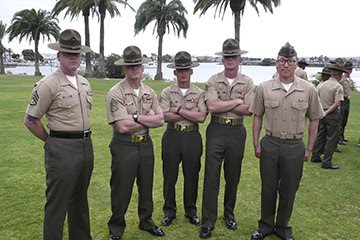 THESE are the ones you should be scared of. The four men in the Smokey Bear hats. They were PFC Gabe's drill sergeants. Don't let the funny hats fool you. These are some of the toughest, strongest and most dedicated Marines out there. Probably all dog people too... whatever.
I'm not sure when I'll see PFC Gabe again. Might not be until Christmas. For now he's stationed at Camp Pendleton, CA. Somehow I don't think it's like being at camp. When he does make it home, there is going to need to be some negotiation regarding his old room. 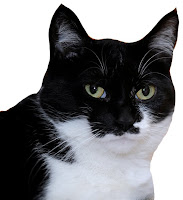