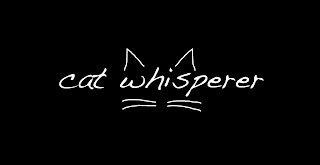 Hi everyone, Katie here.
You're probably wondering about this 'gloman' I speak of. Sometimes
I just call him the Other One. I know, I should be grateful to him since he's the one that adopted me. He brought me home to surprise glogirly on their anniversary one year.
But I'm a cat. I'm not supposed to be grateful. 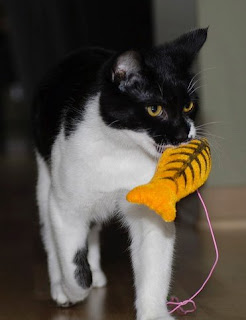 Glogirly calls him the Cat Whisperer. You see, gloman has been trying to turn me into a dog ever since I was a kitten. He's totally a dog person. And apparently watched a little to much of Cesar Millan on TV. So I play along. Mostly when I feel like it. I'll fetch. I'll come to him when he calls. I'll stay and not squirm when he's holding me. I'll even pretend to be interested in whatever he's looking at on his computer. 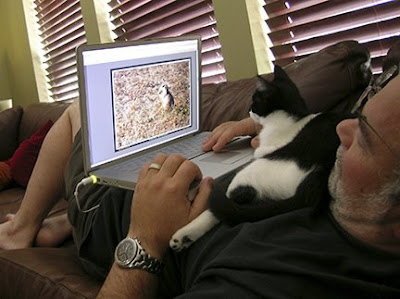 I'll totally stop what I'm doing if he hisses at me. When he hisses I'm apparently doing something wrong. Depending on the severity of the hiss, I may even decide to run. Lately there has been some miscommunication in the mornings with his underarm spray.
He just laughs. I don't find it funny.
I decided to really mess with him and I actually let him pull my tail on a regular basis. I know, crazy. But I even have him believing I like it. It's very entertaining. He's so gullible. 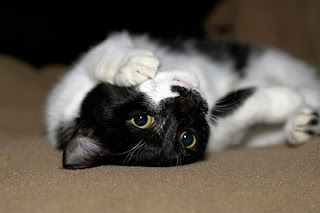 Glogirly lets me get away with murder. So I figure it's safest to just make nice with the Other One. And if all else fails, play the cute card.