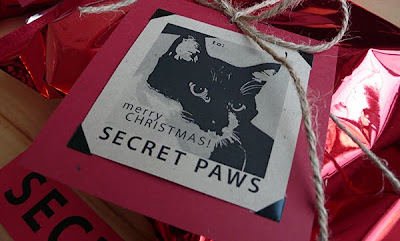 Hi everyone, Katie here.
Well it's high time that Glogirly take a back seat to me. I think she's been getting way too much attention as of late. So I put her to work. I sent her to the store to buy gifts for my Secret Paws. And of course, she came home with the wrong stuff. I made the list as easy for a human to understand as possible. But she came home with treats for a cat that doesn't like treats and rawhide lolly pops for a senior citizen dog that probably wears dentures for all we know. Cat toys for dogs...sheesh, can the girl get ANYTHING right!? So I had to send her back. Again. This time she did good. 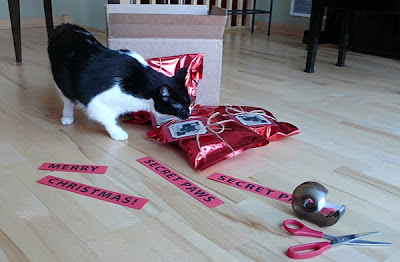 I inspected each item, giving them all a good sniff and a paws up. I really thought I should take them out for a test run, but Glogirly said that wouldn't be polite. 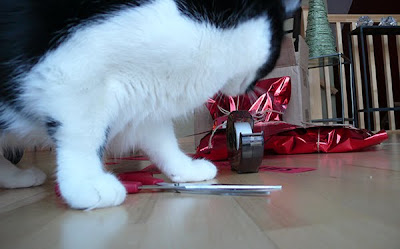 I also helped with the wrapping. 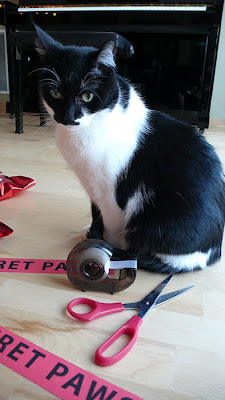 Glogirly did the taping though. I don't do tape. 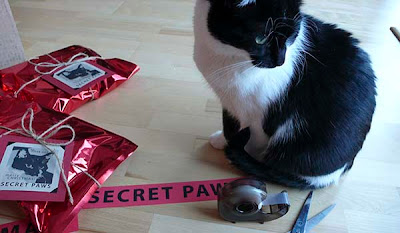 I wanted to make some customized gift tags with my likeness so I told her to open up Photoshop and make it happen. Took her forever and I think she used Photoshop, InDesign AND Acrobat to make them. Either she was trying to show off or just pathetically inept as graphic designers go. In the end though I think they turned out great. Of course it's hard to go wrong with anything that has my face on it. 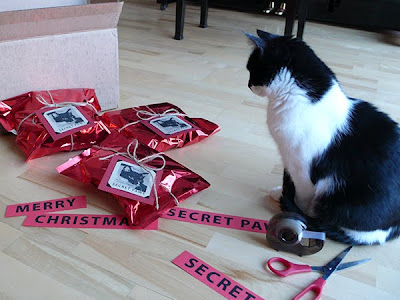 I told her that she simply HAS to get to the Post Office today. That Brian Williams guy on the nightly news said that yesterday was the busiest day of the year for the USPS and that my box has to be postmarked by Wednesday. She better not screw this up too. 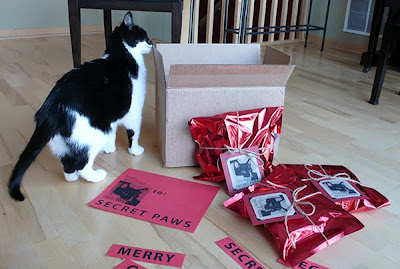 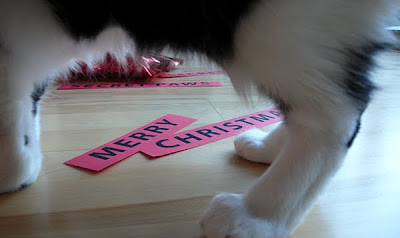 In the meantime, I'm anxiously awaiting a Secret Paws box with my name on it. So far there's nothing under our tree. Glogirly better get busy or my Secret Paws gift will be the ONLY thing under the tree. That is, except for a pile of broken ornaments. Hint, hint.